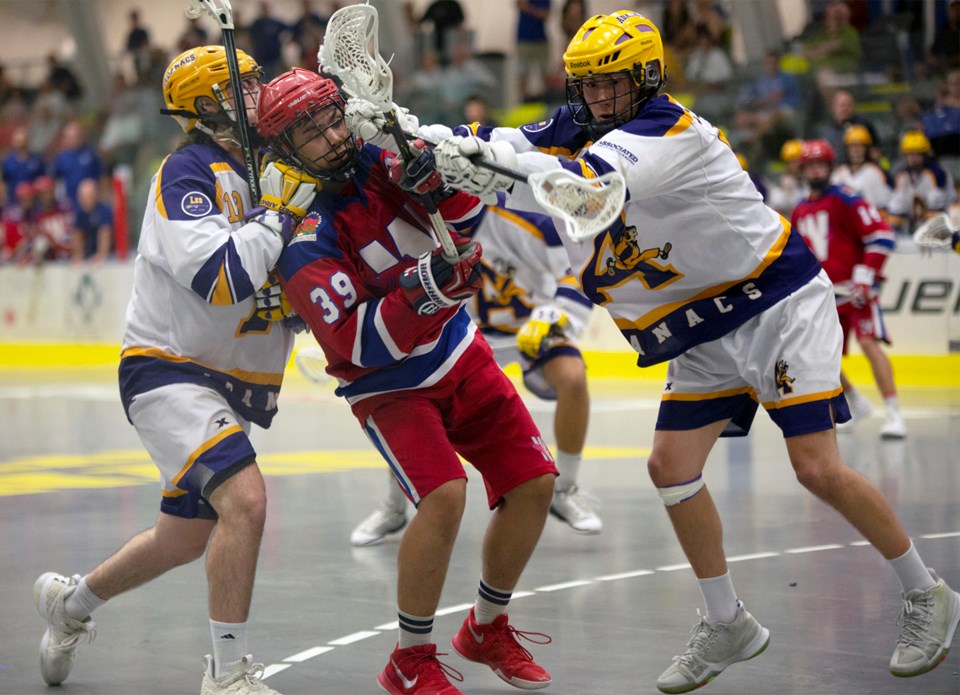 Jalen Chaster, right, will be staying close to home as the former Coquitlam Jr. Adanacs player was selected by the Sr. Adanacs as the top territorial pick in Thursday's Western Lacrosse Association draft of graduating junior players.TRI-CITY NEWS FILE PHOTO

Thursday, the Coquitlam native and former runner for the Coquitlam Jr. Adanacs took a big step towards getting back on the concrete floor at the Poirier Sports and Leisure Complex when he was selected by the Sr. Adanacs as the team’s territorial pick preceding the Western Lacrosse Association’s annual draft of graduating junior players.

Chaster, who scored three goals and 12 assists in 21 games for the Jr. Adanacs in 2019 — the last time leagues were able to compete after the 2020 season was cancelled by the COVID-19 pandemic — said he was “beyond happy” to be staying close to home.

“I grew up in Coquitlam and it is a great organization,” he said. “I am happy to be moving forward with the Adanacs.”

Two other players were selected by their hometown teams in a special draft that allows WLA teams first dibs on players from their immediate geographical area. New Westminster Salmonbellies picked Will Malcolm from the Jr. Bellies and former Langley Thunder runnerDylan McIntosh was selected by the Maple Ridge Burrards.

In the regular draft, the Adanacs looked to the junior team for its top three picks, selecting Thomas Semple at the beginning of the first round and Robert Hofseth to kick off the fourth round, followed by Sam Andalis later in the same round.

Semple scored 189 points in 47 regular season games in his four-year career with the Jr. Adanacs. He added another 82 points in 31 post-season games.

Other players selected by the Adanacs:

Semple’s teammate on the Jr. Adanacs, Nate Faccin, was selected second overall by the Burrards in the regular draft.

In an address prior to the draft that was conducted virtually from the Langley Events Centre, WLA commissioner Paul Dal Monte said the league expects to release its schedule later this month. But when that schedule might actually kick in will depend on public health restrictions and return to play guidelines in place this spring.

Dal Monte recently told the Tri-City News one possible scenario could see the league implement a hybrid season in which all games are played at the Langley Events Centre.

Bad news for NLL could be good news for Western Lacrosse Association
Feb 4, 2021 9:39 AM

BCJALL girding for possibility of delayed season
Feb 9, 2021 9:06 AM
Comments