Connor Jones is a competitive climber who's won provincial and national championships. But he's been identified as having the potential to become an Olympian in a sport he's never tried before.
Jul 7, 2021 10:32 AM By: Mario Bartel 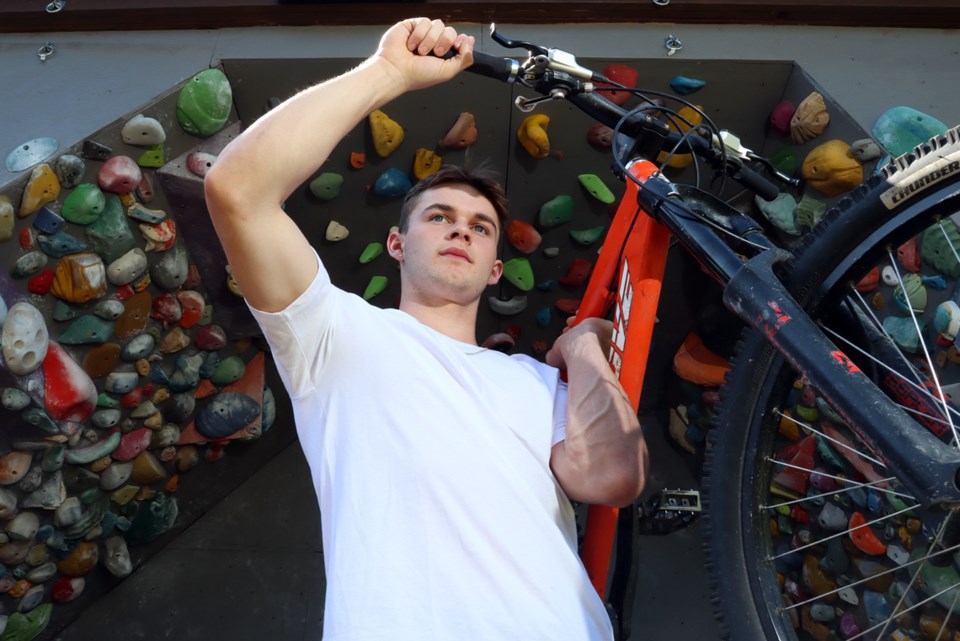 Connor Jones is an accomplished competitive climber but he was recently tapped as having Olympic potential as a track cyclists through the RBC Training Ground athlete search. He doesn't even own a bike, as he's holding his dad's 1990's era mountain bike.MARIO BARTEL/THE TRI-CITY NEWS

In fact, the 16-year-old Grade 11 student at Centennial Secondary has already won several provincial and national age-group titles and is on a path that could someday lead him to the Summer Olympics as the sport joins its roster of sanctioned events in Tokyo this year.

So imagine Jones’ surprise when he was recently identified as an athlete with Olympic potential — in track cycling.

“I don’t even own a bike,” admitted Jones, who had to extract his dad’s 1990’s vintage mountain bike from the garage for a recent photo op.

Jones’ journey from hauling himself up steep walls by his fingertips and wits to potentially speeding around a high-banked wooden oval started at school when the leader of Centennial’s Optimizing Athletics program, Dino Geremia, encouraged his students to apply to the RBC Training Ground Olympic talent search.

The program seeks to identify young athletes between the ages of 14 and 25 who might have the raw ability to someday represent Canada in an Olympic sport.

One day last January, the students who took up the challenge had to fulfill several athletic tasks — 100m dash, a broad jump, vertical jump and a “beep test” that involved a series of short wind sprints  for up to 50 minutes to gauge endurance. Measurements were taken, times recorded, video was shot and witnesses verified results.

In May, Jones was notified he was one of 20 young people tapped by Cycling Canada for potential development in its NEXTGen program for future Olympians.

Jenny Trew, Cycling Canada’s NEXTGen coach, said several of the program’s cyclists were first identified through the Training Ground search, including Kelsey Mitchell, a former college soccer player from Calgary who won gold at the 2019 Pan American Games in the women’s individual sprint race and will be competing at the Tokyo Summer Olympics.

Jones said once he got over his initial shock at being selected for further assessment in a sport he’s never tried, he hit Google to learn all he could.

“It was cool,” Jones said of watching videos of cyclists careening around a 250m oval on lightweight carbon fibre single-speed bikes with no brakes.

The more he learned, the more he thought the sport might indeed be a good fit.

“For me, it’s like the athletic potential I have,” Jones said. “If I get the right training in any sport, I can see myself getting success in it.”

He’ll get a better idea of his potential for success on July 20, when Cycling Canada coaches will be at the Richmond Oval to work with some of the young athletes they’ve identified and put them through further benchmark and sport-specific testing.

Jones said he’s more intrigued by that process than intimidated by it, adding the overall fitness and training regime he employs for all his other sports should serve him well.

“It helped me get here,” he said, although he also admitted he may put in a little extra time on the stationary bike at the gym to boost his cardio fitness.

And even if Cycling Canada decides Jones isn’t the next Curt Harnett, who won three medals for Canada in four Olympics before he became a renowned shampoo pitchman, the Grade 11 student is confident his athletic prowess could still get him to a Summer Games as a climber or even some other sport outside his comfort zone, like rowing.

“My goal is to go to the Olympics,” Jones said. “My goal was never to be an Olympic climber specifically.”