Letter: New Coquitlam residents need to adapt to living on the edge of wilderness 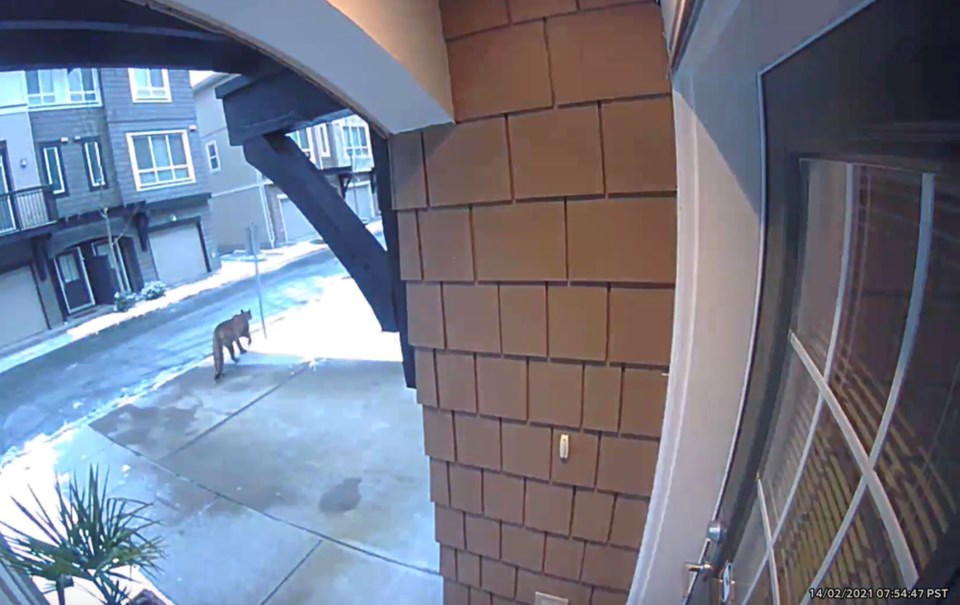 A cougar passes in front of Tiffany Schiller's home in Coquitlam Jan. 14, two days after and only a couple of blocks away from where a cougar snatched a pug puppy from the McArthur family's backyard.Tiffany Schiller

There is a serious divide on Burke Mountain between those who fear larger wildlife and those who wish to coexist. I believe that the city of Coquitlam needs to come up with some education on cougar and bear behaviours that can support the newer people on the mountain to adapt.

Many of us have lived for years on Burke and co-existed with apex animals because we have the knowledge on how to keep safe when around them. My parents taught me and I grew up an only child often playing alone in the woods at the top of Coast Meridian for hours as all the children did. The big rule was to come back at dark and we were taught enough about animal behaviour to know how to deal with animal sightings or encounters when we had them, albeit those were unusual.

No one ever was hurt during an encounter and we had about 15 neighbouring children circulating the neighbourhood during those years. We didn’t have cell phones or camera recordings of animals that are always present when you live on the cusp of wilderness in British Columbia so these animals sightings were not sensationalized. We did have our wits and information that tailored our expectations and created respect for our environments; and did not put us in opposition to nature or have parents who were trigger-ready.

Cougars are the latest animals to be targeted on Burke and media has fuelled the fire by reporting on a few select and rare incidents that involved people not being careful enough and putting themselves and their animals at risk. Many people are on edge these days with all the changes COVID has brought and do not feel they can cope without taking extreme positions. They see one edited version of a cougar stalking video on social media and they think that cougars are invading their neighbourhoods. It seems the people who are this afraid are claiming that it will be a child next and want to eliminate any risk.

That is not realistic.

It’s not realistic because of where they live. There should always be apex wildlife around: yes, there are people on Burke who think if you kill a cougar and her cubs that this will allow them to let their dogs out at night and keep feeding rodents with their bird feeders. An extension of this thinking is that their children will never be harmed if they eliminate all perceived risk. These people do not understand that their behaviour, expectations and lack of knowledge are the problems, not the cougars who are simply following the food. People just need to know more and I bet quite a few of them had no idea where they were moving to when they bought into the well-marketed, newer Burke Mountain subdivisions.

I used to walk up Coast Meridian Road after school as a middle schooler in the late 1970s and early 1980s. There were orchards and farms along the way up the hill with intermittent houses, no yellow lines or city lights. We took many deer trails to visit each other and to get home from school daily. Burke was a magical place growing up, where I was able to develop the strength and identity I did and that has made me very good in my profession and successful in life by many measures.

The only time I ever had a cougar encounter (versus the odd and unusual sighting of one, although often around), was when I was around 7-years-old. I was playing on our driveway when I heard clanging and yelling across the road. I was naturally curious and headed over, walking right between a cougar and her cubs as she was trying to teach them to hunt chickens.

My neighbour was doing all the right things by trying to scare the cougar off safely, and she did wander away with her cubs. I was not harmed or threatened in the least, partially because I had been taught about cougars and did the right things myself. I felt I had a connection and respect for the cougar who left me be and I believe she did so because I was a child and she understood. But who knows? We met, I spoke to her, made myself big and backed away and stayed safe on my way home.

In the end, a conservation officer came and shot the cougar and her cubs for 'threatening’ a child, although likely they also reasoned it couldn’t go after chickens, who were running free. I will always feel a sadness that I played a part in their demise.

To those of you who are focused on the 'us and them,' please realize that you may be creating unnatural and inappropriate divisions when you think the best solution is to kill the apex animals that enter your neighbourhood. We are always at risk in life, people need to adapt and be responsible if they live near large nature areas.

Don’t make the mistakes that lead up to these tragic outcomes. Be preventative: don’t attract rodents, keep your small animals and children next to you, don’t go out at night and keep a stick with you when hiking. If animals do need to be shot, it should be a last resort and I hope that it has been arranged that the meat can be used to feed people. We used to eat cougar and other game up at the hunting club before it became a place known more for gun shooting training and less as a community gathering place.