'Now the business is getting blamed for something the patrons did,' claims head of industry organization representing bars and pubs amid WorkSafeBC violations
Feb 20, 2021 4:44 PM By: Stefan Labbé 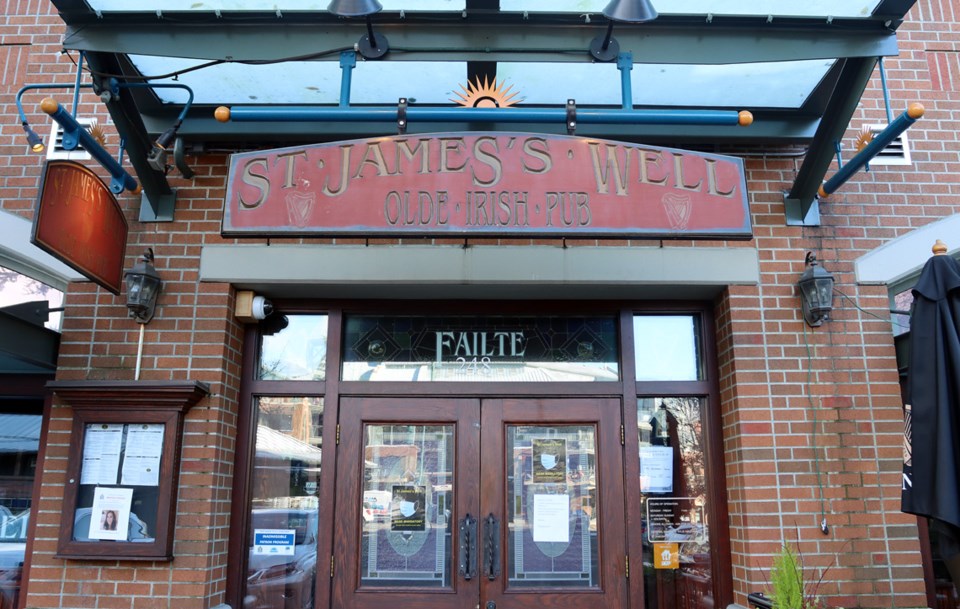 The front door of the St. James's Well Irish pub in Port Moody's Newport Village that closed temporarily because of a community outbreak of COVID-19 that was linked back to a trivia night it hosted.MARIO BARTEL/THE TRI-CITY NEWS

A Port Moody pub that hosted a games night in contravention of public health orders and led to at least 24 cases of COVID-19 should not be faulted for the actions of irresponsible patrons, according to the head of a pub and bar industry group.

Jeff Guignard, who heads B.C.’s Alliance of Beverage Licensees, said the transmission at Newport Village’s St. James’s Well Pub occurred when an asymptomatic patron left their table and interacted with another group.

“It seems like some patrons were mingling and they were told to stop. But the damage was done at that point,” he said. “Now the business is getting blamed for something the patrons did.”

Guignard told the Tri-City News his organization has worked closely with the pub since the Feb. 2 games night super-spreader event, the extent of which is still not clear after health officials made veiled references to an unnamed pub trivia night which sparked a secondary outbreak at a Burnaby daycare and led to cases at workplaces and schools.

The Tri-City News has not independently confirmed whether provincial health officer Dr. Bonnie Henry was speaking about St. James’s Well and a spokesperson for Fraser Health declined to elaborate.

The pub has been closed since then as it underwent a deep cleaning and faced inspections from WorkSafeBC.

Inside St. James’s Well, management is reviewing its COVID-19 health and safety procedures; outside and on social media, the pub has faced a public backlash for holding a trivia night in the first place.

“You should be ashamed!” commented one reviewer on the pub’s Facebook page. “We were regular patrons to your pub until 6 weeks ago when we observed you were not following Covid protocols. We mentioned this to our server. Response was: shoulder shrug.”

“Absolutely appalling to be so careless,” wrote another. “Your patrons can only act how you allow.”

Half measures & variant-fuelled third wave—that’s the path we’re on. Seems a cruel joke that my family & others are infected & have their child care centre shut down because of bar trivia night. But we can’t muster rapid testing or paid sick leave. #bcpoli https://t.co/yOjeUR61g0

Owners of the Port Moody pub turned down requests to comment from the Tri-City News, indicating Friday it would release a statement on social media. However, that statement has yet to be posted and the St. James’s Well website has since been taken down.

But Guignard said trivia nights were never clearly banned prior to the Port Moody pub exposure event, and of the roughly 8,800 establishments he represents across the province, hundreds of others had regularly hosted such activities thinking they were in line with public health orders.

“It’s a socially-distanced game you play. It’s equivalent to watching television,” he said.

The confusion hinged on the wording of the public health order banning gatherings and events at pubs and bars. While the order includes the words “quiz” and “game” under its definition of an event, it doesn’t specifically mention “trivia.”

“In our industry, even prior to the pandemic, we’re highly licensed, so we adhere to these guidelines strictly,” Guignard said. “Maybe we should have known that, but there’s hundreds of bars and pubs across the province that didn’t know.”

Guignard added that since the Port Moody exposure, his organization worked closely with WorkSafeBC and the Office of the Provincial Health Officer, ultimately directing the thousands of pubs and bars he represents to immediately end any trivia nights.

At the same time, Guignard said he told his members to consistently review their health and safety plans, while at the same time noting that “the protocols work” and “there’s no reason to change them.”

St. James’s Well isn’t the only pub or bar to be confused over what counts as a banned event.

WorkSafeBC inspections carried out in Fraser Health found more than 25% of sports bars and pubs visited in the lead up to Super Bowl Sunday were in violation of public health orders designed to stem the spread of COVID-19.

At the time, Owen Coomer, general manager of Coquitlam’s The Taphouse, said the rules around certain promotions, like food specials, made compliance a guessing game at times.

“Everything is just too vague,” he told the Tri-City News. “Where's the line?”

It’s not clear whether blame for the Port Moody super-spreader event lies with the uncooperative patrons or the business itself. However, St. James’s Well has since been found to be in violation of COVID-19 health and safety rules.

On Feb. 4, two days after the exposure event, WorkSafeBC conducted an inspection of the Port Moody pub.

According to the inspection report obtained by the Tri-City News, the employer did a lot right by properly implementing mandatory mask and physical distancing policies, installing Plexiglass between tables and offering hand sanitizer. It also provided QR codes to access the menu and each table was found to have a list of rules for patrons to follow.

Other measures the pub rolled out to lower the risk of transmitting COVID-19 included lowering the volume of televisions and music so people don’t have to shout, running at 65% capacity, and only allowing reserved seating on Sundays when demand grows.

But by not having a written safety plan, the pub was found to be in contravention of an Occupational Health and Safety Regulation around reducing risk of exposure to a chemical or biological agent.

“Workers may be exposed to COVID-19,” wrote the WorkSafeBC occupational hygiene officer in her inspection report.

As a result of the visit, the WorkSafeBC inspector ordered the pub to update its COVID-19 safety plan by adding supervised daily health checks for its 28 workers, as well as implement a policy requiring patrons to wear masks in any space shared with workers or other members of the public.

A spokesperson for WorkSafeBC confirmed the oversight body has not issued any fines against the Port Moody pub as it cooperates with inspectors and works to get into compliance.