Musicians with the Coquitlam Youth Orchestra will tune next Friday in for a virtual concert they helped, to create to bring attention to youth mental health in B.C.
Apr 27, 2021 11:54 AM By: Janis Cleugh 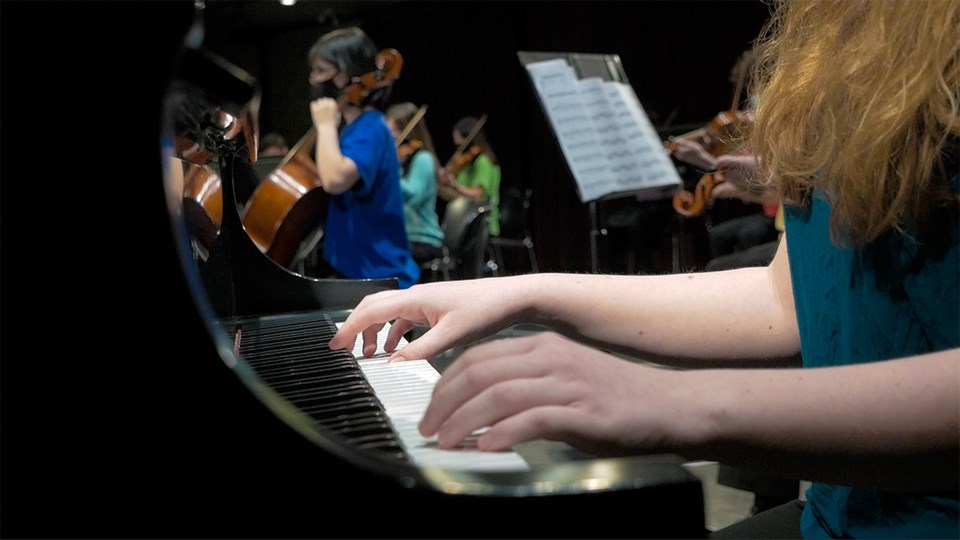 The Coquitlam Youth Orchestra will see its concert on YouTube and Facebook on May 7 to mark Youth Mental Health Day, in B.C.STARLIDE INC. PHOTO

Musicians with the Coquitlam Youth Orchestra will tune next Friday in for a virtual concert they helped, to create to bring attention to youth mental health in B.C.

The free show, which airs on YouTube and Facebook on May 7 to mark Youth Mental Health Day, involves 350 student musicians and five conductors from across the province.

Besides the Coquitlam cohort, under the direction of Reg Quiring, the orchestras are from Victoria, Langley Community Music School, Okanagan, Surrey and Vancouver.

Quiring said each youth orchestra has been rehearsing the commissioned piece, by Juno award winner Jordan Nobles, since last November; last month, the orchestras taped their own parts for Nobles to edit together into one digital recording.

While Coquitlam didn’t include its brass or woodwinds due to the pandemic, Quiring said his orchestra featured strings. His daughter, Sophie, played piano while his eldest, Natalie, named the initiative “Apollo,” a nod to the Greek god of music and healing.

Apollo is also the title of Nobles’ composition. “It’s a really wonderful piece of music,” Quiring said of the work that runs about six minutes, and was performed by his string team after his orchestra’s spring concerts at the Evergreen Cultural Centre on March 19. “He wrote this piece with the idea of youth playing music in support of youth mental health.”

The youth orchestras hope to raise $10,000 for the B.C. division of the Canadian Mental Health Association (CMHA) following the concert on May 7.

“Community youth orchestras create valuable spaces for young people to connect with each other, express their talents and tackle new challenges — all factors that foster good mental health,” wrote Maya Russell, CMHA’s director of community engagement. “The team at Canadian Mental Health Association is excited about this special performance and grateful to be part of the group’s efforts to promote and support youth mental health in B.C.”

Quiring, a father of three, said his young musicians relate to the cause especially during the pandemic. “They are going through stuff themselves,” he told the Tri-City News. “There’s a certain energy there because they know and they’re experiencing this for the first time. They’re doing this [initiative] for themselves as much as for anyone else.”

He added, “This seemed like such a good time to do a concert and give the kids a goal to actually help them with the current situation. It certainly empowered them.”

It’s not the first charitable push for the Coquitlam Youth Orchestra: In 2017, it collected $10,850 for an African drought crisis; the Canadian government matched their total.

• To donate to the Apollo Initiative, go to canadahelps.org/en/pages/the-apollo-initiative/.

Festival du Bois' musicians grateful 'for the opportunity to perform' during pandemic
Apr 20, 2021 11:00 AM
Comments