BC Conservation officer says bear's escalating behaviour was 'an extreme public safety risk': BC Bear Alliance says bear should have been hazed out of the neighbourhood instead of destroyed
Jun 9, 2021 3:45 PM By: Diane Strandberg 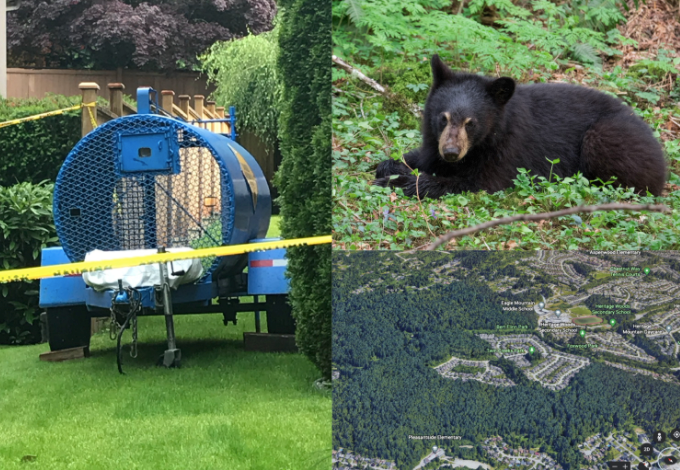 An advocacy group says a bruin shot for repeatedly entering a Port Moody neighbourhood — including a home — should have been hazed out of the area instead of killed.

But the BC Conservation Officer Service (BCCOS) says the bear was not a candidate for relocation and was exhibiting dangerous behaviour, including charging a man and entering an occupied house.

“The adult bear displayed habituated and food-conditioned behaviour which showed no fear of people,” spokesperson Sgt. Todd Hunter said in email to Tri-City News, confirming the organization euthanized "an adult male black bear" that had been frequenting the Wilkes Creek area of Port Moody on Sunday (June 6).

“The escalating behaviour of this bear was very concerning to Conservation Officers and an extreme public safety risk.

“We understand people are passionate about wildlife but this bear was not a candidate for relocation — the risk to the public was simply far too great.”

In addition to feeding garbage, the bruin charged a man in his backyard, entered an occupied home, and was approaching people within several feet.

It wasn't easily chased away, according to Sgt. Hunter.

However, the report by the BC Bear Alliance, which includes a Coquitlam Bear Aware group, said more could have been done to save the bear dubbed "Wilbur."

The group claims that efforts to remove the bear occurred after a “few neighbours” in the Heritage Mountain area called conservation officers.

In one instance, the bear “allegedly” walked into a house, according to the group.

“A baited trap was set and two days later Wilbur was dead.”

The group suggests alternative measures, such as hazing, should have been used to scare the bear back into the forest.

“All Wilbur needed was to be shown boundaries with a firm voice, some noise or maybe a hiss of a bear spray. No gun or trap was necessary. The surrounding forest was Wilbur’s world, and he would’ve gone back there. As for so many other bears, a bullet to the head stopped him from returning home.”

"The public needs to know that bears continue to be killed near our communities and the blue bear traps are not set for bears to be relocated," Joyce stated in an email to Tri-City News.

Since April, two bears have been destroyed in the Tri-Cities, one in Port Moody in June and one in Coquitlam in May, and two bruins from Coquitlam have been relocated, according to the BCCOS.

It recommends securely storing garbage, pet food, bird seed and other attractants to help prevent bears and wildlife from accessing them, which can create a public safety risk.

As well it recommends the following tips: