Pedestrians struck in aftermath of collision sent to hospital, the intersection at United Boulevard and Golden Drive southbound is closed to allow RCMP investigators to collect collect evidence
Jan 26, 2021 9:50 AM By: Diane Strandberg 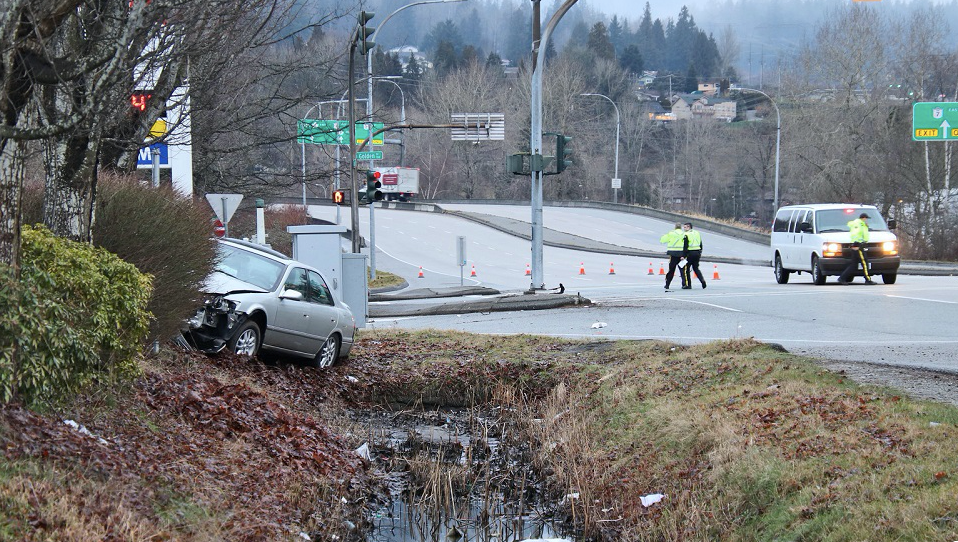 Coquitlam RCMP closed off southbound United Boulevard for hours while they investigated a two-car collision.Shane MacKichan

At least two pedestrians were hit in the wake of a two-car collision while waiting to cross the intersection of Golden Drive and United Boulevard Tuesday morning.

The pedestrians, along with two people from the vehicles, were sent to hospital, including one pedestrian with serious injuries.

Const. Deanna Law said the collision happened at approximately 6:47 a.m., at which time police received a number of 911 calls about the accident.

Police say the drivers of the two vehicles are cooperating with police and collision investigators are are on the scene.

Const. Law couldn't be specific as to how many pedestrians were involved, but it was a group, she said, possibly as many as four or five people.

"They were trying to cross the crosswalk," said Const. Law. "They weren’t crossing negligently. Once the vehicles collided they went into the direction of the crowd."

Police are asking anyone that witnessed the collision or has dashcam video to contact Coquitlam RCMP at 604-945-1550 and quote file number 2021-2301.

The intersection at United Boulevard and Golden southbound was closed to allow RCMP investigators to collect evidence. However, it was re-opened at approximately 11:30 a.m., according to a Tweet.

Roads are open again following the motor vehicle collision at the intersection of United Blvd and Golden Drive.

According to a witness, a vehicle making a left turn onto Golden westbound was hit by a southbound vehicle.

The force of the impact caused one of the cars to go over the traffic island striking two pedestrians who were waiting to cross the street. One of them suffered serious injuries.

The other vehicle ended up on the side of the ditch.

Paramedics, Coquitlam fire department and RCMP responded to the scene.