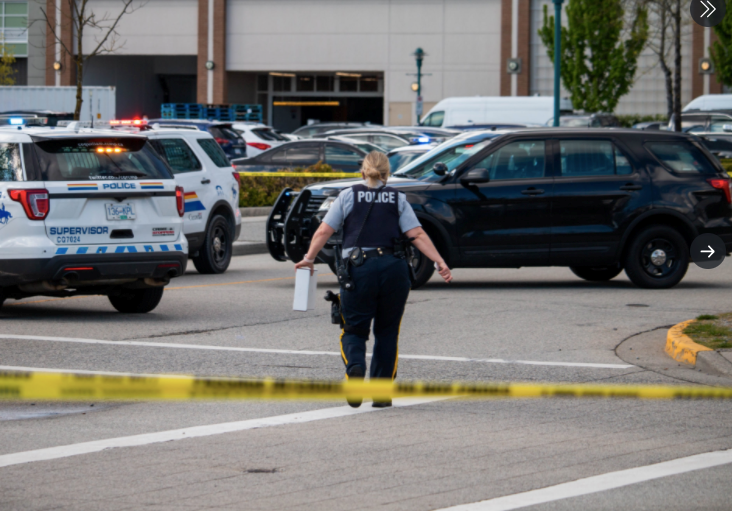 Coquitlam RCMP block off an area of Coquitlam Centre mall Monday to investigate a stabbing and a shooting.Chami An

A stabbing and the discharge of a firearm near the busy entrance of a Coquitlam mall Monday afternoon have prompted a multi-jurisdictional investigation into whether the two incidents are connected and linked to ongoing Lower Mainland gang conflict.

So far, only limited information is available and police say the 23-year-old male stabbing victim has not been cooperative with the investigation.

No one was injured in the shooting, and police say only one bullet was fired.

The investigation began at about 4 p.m. on Monday afternoon when Coquitlam RCMP received several calls about a firearm being discharged at the corner of Northern Avenue and Baldwin Street.

When police arrived, they found a man had been stabbed in a fight about 100 metres from the eastern entrance of the Coquitlam Centre mall, close to Walmart and H&M. The man, a Coquitlam resident whose name has not been released, transported himself to hospital where he was treated for non-life-threatening injuries, according to police.

Meanwhile, police stayed on the scene for several hours to securing evidence and interviewing witnesses in both the shooting and the stabbing, with members of the Combined Forces Special Enforcement Unit assisting in the investigation, according to Coquitlam RCMP.

According to the unit’s website, the CFSEU-BC’s mandate is to “target, investigate, prosecute, disrupt, and dismantle the organized crime groups and individuals that pose the highest risk to public safety due to their involvement in gang violence.”

However, with the investigation in its early stages, Coquitlam RCMP is unable to say with certainty how the incidents are connected.

“It’s unclear if the stabbing and shooting are connected and if there is any connection to ongoing gang conflict,” Const. Deanna Law told the Tri-City News Tuesday.

Anyone with information, cell phone or dash cam video regarding the stabbing or the shooting is asked to contact the Coquitlam RCMP at 604-945-1550 and quote file #2021-10850.

The stabbing and shooting come just one week after a 20-year-old Coquitlam man was shot and killed at a basketball court at Town Centre Park.

According to police, Bailey McKinney had a history of police interactions and had “conflict” with certain individuals who may be responsible for his murder.

RCMP have not provided any more information about the McKinney murder investigation at this time.

However, a large and growing memorial to Bailey McKinney has been placed at the park.

As well, a family member has set up a GoFundMe online fundraiser, which has raised more than $8,000 to help with funeral costs and support the victim’s family.

Coquitlam has been the focus of an intensive police investigation during the month of April, including by the Combined Special Forces Unit after four shootings in the space of a week.

The investigation into rising gang violence also expanded to a Port Coquitlam neighbourhood last week, after a silver Dodge pick-up truck was found burned-out around the corner from Terry Fox secondary. Police said the vehicle had been staged and was used as part of an escape route following the murder of a 46-year-old ex-MMA fighter and UN Gang member outside Langley Sportsplex on the morning of April 21.

Coquitlam RCMP is investigating whether those four recent shooting incidents — three of which resulted in gunshot wounds to male victims —  are linked to drugs and the Lower Mainland gang conflict.

The investigation has been hampered by the fact that the victims were not cooperative with police.