The Combined Forces Special Enforcement Unit is now assisting Coquitlam RCMP in the investigation of a spate of shootings in recent days, including two over the Easter long weekend
Apr 5, 2021 11:23 AM By: Diane Strandberg 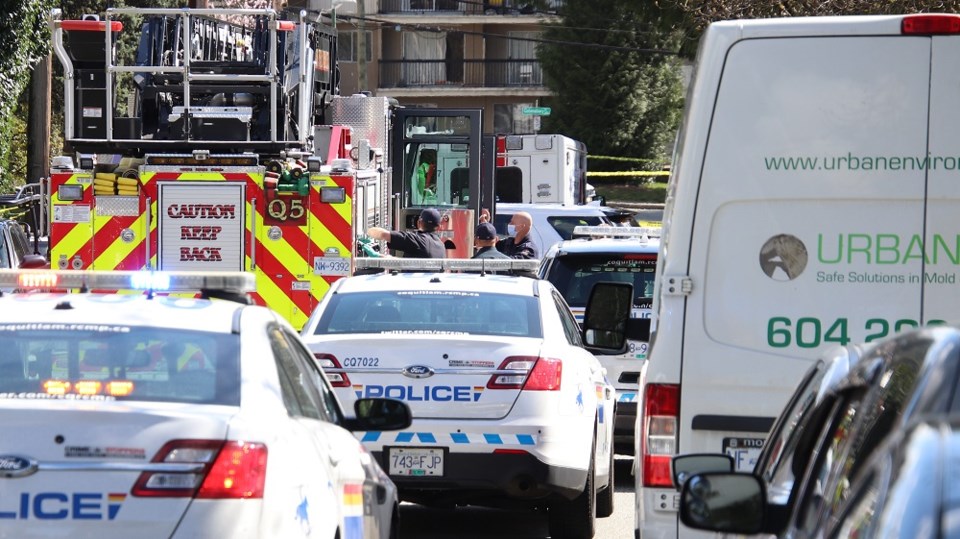 On Sunday,, April 4, at about 11 a.m., Coquitlam RCMP responded to calls about a shooting in the 1200-block of Howie Avenue, near Gatensbury Street. Upon arrival, they found a man suffering from gunshot wounds.Shane MacKichan

Coquitlam RCMP are investigating whether four recent shooting incidents — three of which resulted in gunshot wounds to male victims —  are linked to drugs and the Lower Mainland gang conflict.

The shootings considered “unprecedented” by police have prompted Coquitlam RCMP to bring on other Lower Mainland police partners in the investigation, and to beef up patrols in the area on Coquitlam’s west side.

In a press release, Insp. Darren Carr confirmed that members of the Combined Forces Special Enforcement Unit are now assisting with the police investigation while Coquitlam RCMP’s own analysts are also working to determine if there are any links between the shootings and the ongoing gang conflict that has resulted in deaths in other municipalities.

Two of the recent Coquitlam shootings occurred this past Easter weekend: The first at 9:30 p.m. on Saturday, April 3 when police patrolling in the area of Good Neighbour Park located at 1415 Foster Ave. heard shots being fired. Upon arrival, though, they didn’t find any suspects or victims.

However, the following morning, on Sunday, April 4, at about 11 a.m., police responded to calls about a shooting in the 1200-block of Howie Avenue, near Gatensbury Street. Upon arrival, they found a man suffering from gunshot wounds. He was taken to hospital and is reportedly in stable condition and expected to survive his injuries, according to police.

In a statement issued Sunday evening, Coquitlam RCMP say they are investigating whether these latest two incidents are linked. “Some tentative connections have been made to drugs and gang related activities with these two shootings, but the investigations are still in the early stages,” Insp. Darren Carr confirmed in a press release.

The first occurred Tuesday, March 30 when a man was shot in the 300-block of Decaire Street in Maillardville and a burning vehicle was found a few blocks away; the second was on Wednesday, March 31 at 5:30 p.m. when shots were fired in the 600-block of North Road and one man was taken to hospital with gunshot wounds.

Calling the shootings “unprecedented,” police are asking anyone with CCTV footage, information or eye-witness accounts to call them or Crime Stoppers.

“We are appealing to the public to come forward if they have any information about these recent events or have CCTV footage from area businesses and residences. Should any member of the public observe any suspicious activities, please call police or Crime Stoppers,” Insp. Carr stated.

However, he noted the police investigation is somewhat hampered by the fact that “the victims are not being cooperative with our investigators.”

Though these shootings all happened within days of each other, they are not the first to have happened in Coquitlam this year: In January, a drive-by attack in a Burke Mountain neighbourhood sent a man to hospital, and a shooting in a Burquitlam condo provoked a massive response from the RCMP Lower Mainland Emergency Response team after a woman was found bleeding in the lobby.