B.C. health officials have revealed new details of how a single pub trivia night led to the exposure of nearly 300 people across a daycare, industrial sites, a restaurant, a store and the isolation of entire class at a local school.
Mar 3, 2021 3:03 PM By: Stefan Labbé 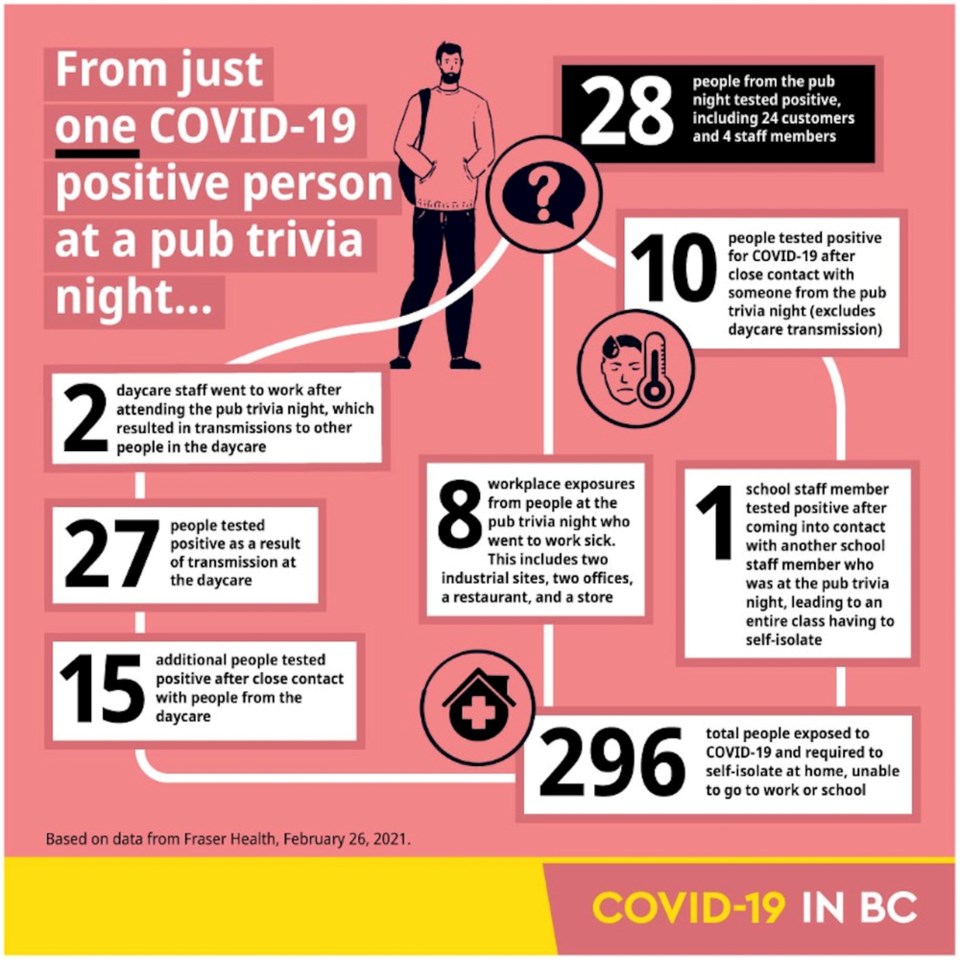 B.C. health officials have revealed new details of how a single pub trivia night led to the exposure of nearly 300 people across a daycare, industrial sites, a restaurant, a store and the isolation of an entire class at a local school.

“From just one COVID-19 positive person at a pub trivia night…” begins the infographic, before detailing how and where 296 were forced to self-isolate at home.

Over the last few weeks, health officials made veiled references to an unnamed pub trivia night which sparked a secondary outbreak at a Burnaby daycare and led to cases at workplaces and schools.

While not specifically revealing the location of the pub trivia night — where 24 patrons and four workers initially sparked the chain of transmission — reporting by the Tri-City News confirmed a super-spreader event of the same scale stemming from St. James’s Well in Port Moody.

Last month, an industry spokesperson confirmed there had been no other COVID-19 transmission events linked to a trivia night in any bar or pub in B.C.

From the pub night, transmission chains break into three streams, according to the infographic. Two daycare staff are said to have gone to work after attending the trivia night, sparking infections among 27 people linked to the daycare, and another 15 secondary cases.

A second series of transmission events occurred in eight workplaces after people who attended the trivia night went to work sick. Those included: two industrial sites, two offices, a restaurant and a store.

Finally, contact tracers tracked a third chain of transmission among 10 people who had close contact with someone who attended the pub trivia night. Of those, one school staff member came to work sick, infecting a colleague and triggering the self-isolation of an entire class.

The super-spreader event coincides with a surge of COVID-19 cases across the Tri-Cities in recent weeks. Last week, the BC Centre for Disease Control released data indicating the three cities had one of the highest per-capita rates of infection in the Lower Mainland, on par with Surrey.

The BCCDC is expected to release updated case numbers over the next 24 hours.