Duelling petitions between neighbours of the Shaughnessy Park Off-Leash Dog Area have led some to call for change due to 'intolerable' noise, while dog owners want it re-opened immediately to provide a safe place for dogs to run off-leash
Mar 26, 2021 11:23 AM By: Diane Strandberg 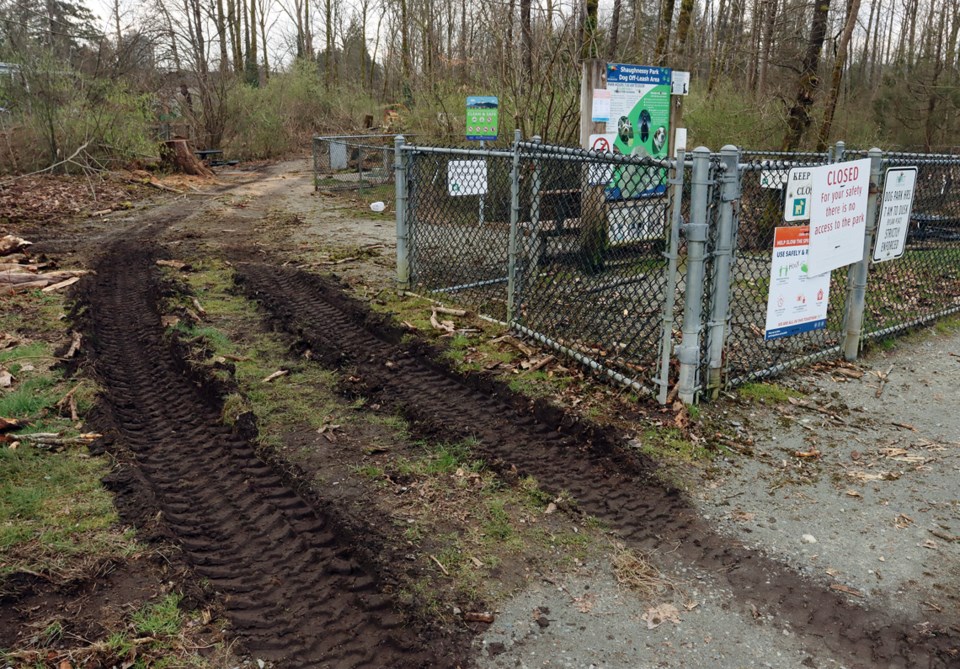 The off-leash dog park on Shaughnessy Street in Port Coquitlam is currently closed while crews cut trees. Some nearby residents have signed a petition calling for it to remain closed because of the barking noise from off-leash dogs.Mario Bartel

Bill Atfield calls himself a dog-lover. But the 78-year-old’s patience is wearing thin over what he calls “intolerable” noise coming from the Shaughnessy Park off-leash dog area next to his apartment in Port Coquitlam.

Dogs fighting, dogs barking in play or aggression and pet owners yelling and not controlling their animals are among his concerns, said Atfield, whose window in the Stewart House seniors’ building at 2217 Prairie Avenue overlooks the dog park.

Atfield told the Tri-City News the city isn’t enforcing its own noise bylaws and he wants some action. He’s given the city a 36-name petition calling for the dog park’s permanent closure after talking to his neighbours, most of them seniors, who say they don’t like the noise either. Some are afraid to walk down the path because of aggressive dogs on the other side of the fence, Atfield said.

“It’s waking us up in the morning and there are health hazards associated with the stress and anxiety and fear and anger that’s felt by most of us,” said Atfield of the dog park noise.

For about two months the park has been “peaceful and quiet,’ while it was closed due to hazardous trees.

Atfield said he’s worried about what will happen when the park re-opens after trees are removed because the constant sound of dog barking is making his life miserable.

But not everyone shares his point of view.

A group of Port Coquitlam dog owners has started a petition on change.org calling for the immediate re-opening of the park.

They say the park with a forested trail circuit is perfect because it’s shaded and people can walk the circuit while their dogs run free.

“It is the biggest park in Port Coquitlam and the only park that provides a shaded area for the dogs to run. Many people are within walking distance to this park and are not able to walk to the other smaller parks as they are too far. This leaves no park or area for one’s dog to have some freedom off-leash,” said Helen Cran in her petition.

According to the city, the park is open from 7 a.m. to dusk, and was chosen after consultation in 2009 because of its accessibility and its location surrounded by greenery, providing a buffer between the park and the general community.

“Off-leash dog parks are places where pet owners can take their dogs to run free without a leash while ensuring their dogs are controlled and not violent or aggressive. Pet owners must be on-site for the duration of the visit and abide by the off-leash area etiquette from 7 a.m. to dusk. Our Bylaw Services staff do proactively monitor the parks for compliance,” stated Forrest Smith, director of engineering and public works in an email.

Currently, hazardous trees are being removed at the park, with new trees to be planted this winter. The park should re-open in early April when it’s safe to re-enter, said Smith.

Atfield told the Tri-City News that he expects the park to re-open despite his petition. But to improve the lives of the immediate neighbours, he would like the city to put in noise buffering trees or another type of sound dampening barrier, and possibly bark cessation devices to curb the barking.

“Larger fir trees, that’s what I assumed would be planted; then there would have been a buffer visually and a sound barrier," he said.