As many as 300 cases linked to the St. James's Well trivia night on Feb. 2, as provincial health officer warns about a recent uptick in the number of COVID-19 cases
Feb 26, 2021 1:25 PM By: Diane Strandberg 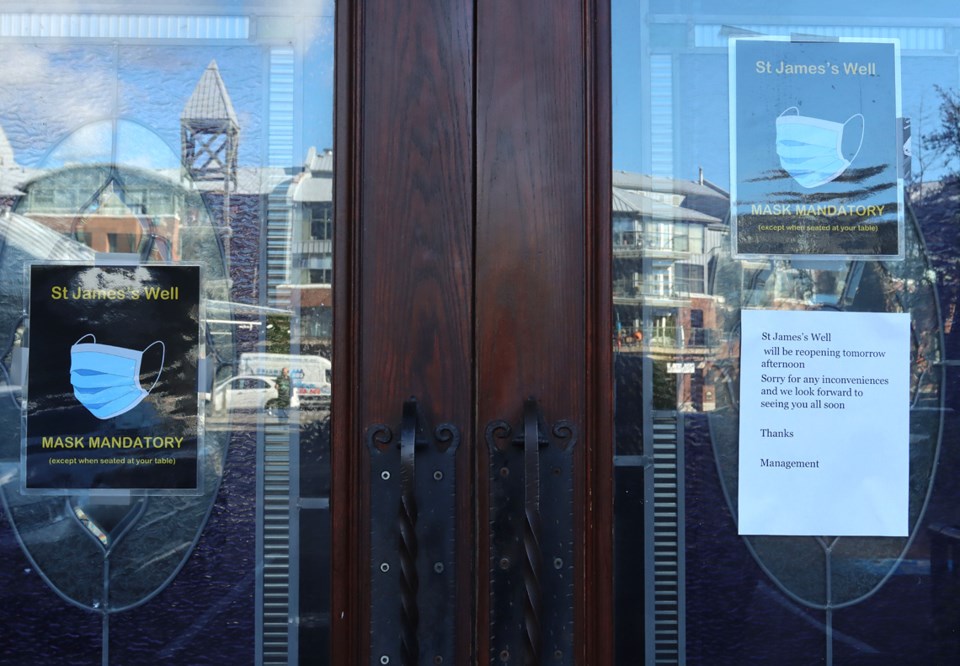 A sign on the door of St. James's Well Irish pub in Port Moody's Newport Village advises patrons of its temporary closure after a community outbreak of COVID-19 was traced to a trivia event there.Mario Bartel

While not naming the Port Moody pub, Henry said a pub she talked about before was responsible for hundreds of COVID-19 cases.

“These are the chains of transmission we need to stop as soon as we can and that’s why we pay attention to not only the overall numbers and how they’re moving but numbers in different communities and where those transmission events are happening,” Henry said.

B.C.’s provincial health officer provided the number as she described the complex series of factors she is monitoring before she can decide whether to loosen or tighten restrictions in the coming days.

Among the issues she is watching is the recent “uptick” in the reproductive rate of COVID-19 transmission, which she said has been above one in Fraser Health and the Vancouver Coastal health region, as well the percentage of test positive cases, which is 8% in Fraser Health Health compared to 6.7% in the rest of B.C.

“It’s like a tree that keeps growing and spreading, but we need to keep cases low and slow so we can control that. We are continuing to watch these indicators and when we have confidence that they are slowing in a sustained way, that is when we will be able to ease restrictions,” Henry said.

The St. James’s Well exposure was flagged by Fraser Health, which resulted in the pub being closed for several days and WorkSafeBC conducting an investigation which required the pub to update its COVID-19 safety plan by adding supervised daily health checks for its 28 workers, as well as implement a policy requiring patrons to wear masks in any space shared with workers or other members of the public.

A representative from B.C.’s Alliance of Beverage Licensees told The Tri-City News the transmission at Newport Village’s St. James’s Well Pub occurred when an asymptomatic patron left their table and interacted with another group.

Health officials have never named the pub, but St. James’s Well was identified on the Fraser Health website when it listed the exposure notification and asked people to self-monitor for symptoms.

Meanwhile, health health officials made veiled references to an unnamed pub trivia night as sparking a secondary outbreak at a Burnaby daycare.