A parent says Port Moody Amateur Hockey Association is offside with its account of COVID-19 cases that has caused the league to pause activities until at least Thursday.
Feb 23, 2021 10:07 AM By: Mario Bartel 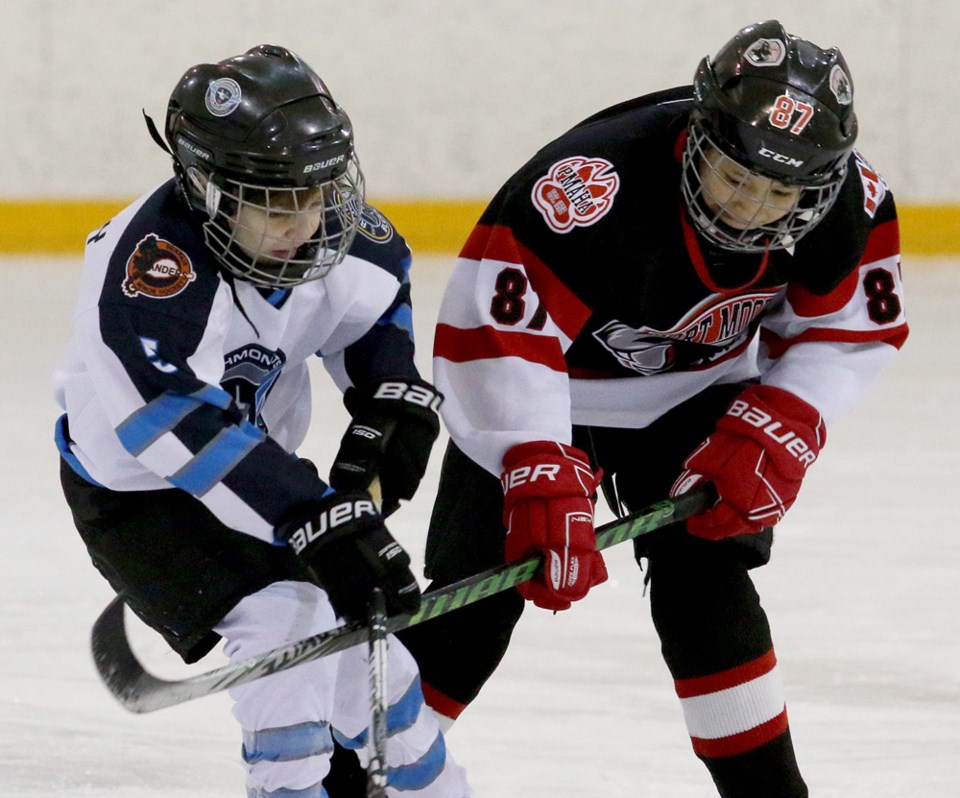 Port Moody Amateur Hockey Associatioin has been sidelined until at least Thursday because of several COVID-19 infections among its members. But a parent says the association isn't giving a full picture of the number of people who've been infected.TRI-CITY NEWS FILE PHOTO

A Port Moody parent says the city’s amateur hockey association is underplaying the extent of COVID-19 infections that has caused it to shut down until at least Thursday.

The parent, who asked not to be identified so their child wouldn't be singled out, said the lack of full disclosure is making it difficult for families to make informed decisions about their own self-isolation or whether their kids will return when the Port Moody Amateur Hockey Association resumes its activities.

On Feb. 17, PMAHA released a statement that it’s putting its season on hold after four of its members had tested positive for COVID-19 in a six-day span beginning Feb. 4. The league did not say whether it was players, coaches or volunteers who’d been infected.

But the parent said nine players have been stricken on their son’s team, as well as coaches, a safety officer and manager. At least one other team has been similarly infected. The parent added their entire family has since fallen ill.

“It was just like a domino effect,” said the parent.

Indeed, a letter sent to families by the Fraser Health Authority on Feb. 14 indicated there may have been exposures at the Port Moody recreation complex over a nine-day period from Feb. 2 to 10.

“We have confirmed that multiple people have COVID-19,” stated the letter. It advised it wasn’t an official “isolation notification,” but families should monitor their health for the next 14 days.

While teams have been limited to just practices since Nov. 7, when provincial health officer Dr. Bonnie Henry imposed tighter restrictions on indoor sports activities in the Fraser and Vancouver Coastal health regions that were subsequently extended to the entire province, the parent said teams usually get one session a week with a developmental coach that works with several teams.

The parent also expressed concern about the league’s mask policy that requires face coverings upon entering and leaving the arena, but doesn’t mandate coaches wear them while they’re working with players on the ice.

PMAHA president Stephanie Naqvi said the league “remains committed to following the guidelines of ViaSport, BC Hockey and Fraser Health, and in some cases we exceed their minimum standards.” She declined to provide any further details on cases within the association beyond its previous statement.

Fraser Health’s chief medical officer, Dr. Elizabeth Brodkin, said every sports team in the province must have a COVID safety plan in place “that should be followed.”

She added the presence of infections on sports team is a reflection of the way the virus is circulating in the community.

The parent said that’s what is so worrisome, especially as infection rates rise locally and variants of the contagion threaten to take hold.

Last week, the BC Centre for Disease Control reported the case count for new COVID infections in the Tri-Cities had spiked by 147%, and 33 schools had been sent COVID exposure notices. As well, Mountain Meadows elementary school in Port Moody was grappling with a cluster of cases that resulted in the school district sending in additional administrators while the principal self-isolated for 14 days.

Also, a trivia night at the St. James’s Well pub in Newport Village has resulted in 25 confirmed infections — 21 to patrons and four staff — according updated numbers provided by Brodkin on Monday.

The parent said the worry there’s a link between all the cases is palpable.

The parent added the earlier families are informed, and the more information they’re given, the better they can manage their own activities to ensure their health and that of the community.

“It could have changed our whole month here. We could still have our kids in hockey,” the parent said. “It’s disappointing people don’t take it as seriously.”

– with files from Stefan Labbé and Diane Strandberg