"There’s just nothing out there that’s affordable between us and that’s realistic,” couple says, as Port Coquitlam deals with affordable rental housing shortage amidst pandemic
Jan 27, 2021 3:43 PM By: Diane Strandberg 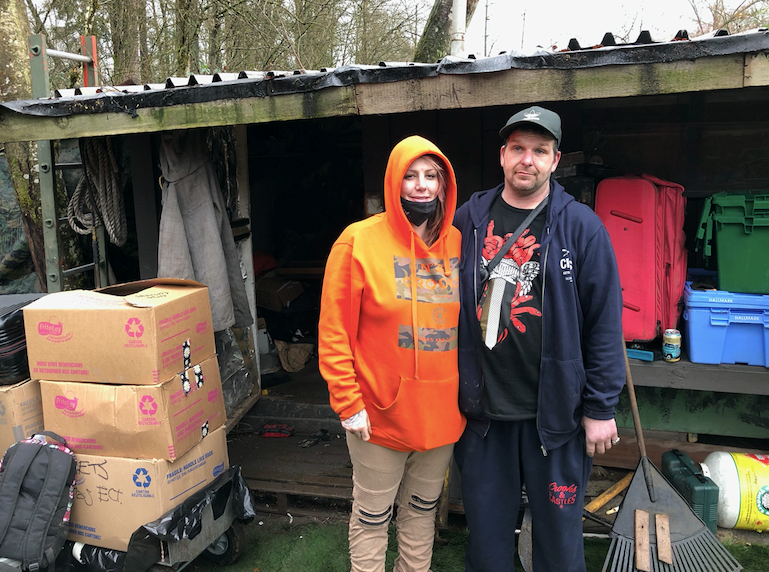 Sid and Sharon built this cabin in the woods in Port Coquitlam, now they are worried they will be evicted but say they have nowhere to go.Red Braid Alliance

A couple living in a make-shift cabin they built in the woods near a public park in Port Coquitlam are worried they’ll be evicted and find themselves sleeping on the street.

Sid and Sharon, who declined to provide their last names, have built the structure using old wood and tin in a treed area north of Gates Park, and have quietly kept to themselves over the past several months.

But a recent visit by Port Coquitlam bylaw officers has them worried they’ll lose their temporary home.

“I don’t know why there’s such an urgency to get us out of here,” said Sid, who is on a disability pension and does junk removal to earn an income.

“They came down today and I told them basically where we were at and what was going on and I didn’t want any conflict.”

The couple began to pack up but when the bylaw officer left without forcing the issue, they became hopeful they might be allowed to stay longer.

Still, the threat of eviction hangs over their heads.

“We don’t want to have this taken away from us and (get) thrown out on the street,” said Sharon.

Their plight is not surprising, said Andrea Corrigan, who couldn’t confirm that her group Hope for Freedom Society was working with the couple because of confidentiality reasons.

Corrigan, who is the society’s executive administrator, said the rental situation has been worse in recent months because COVID-19 is making renters stay put, rents are more expensive, and local shelters are either full or not running because of the pandemic.

“We don’t have a lot of affordable, sustainable housing in the Tri-Cities. It is hard to find places that are truly affordable for people on income assistance,” Corrigan said.

It’s not known what the next steps are for the couple but the city of Port Coquitlam said they are working with them to find solutions.

“The city’s bylaw officers take a compassionate approach and do a tremendous amount of work to reach out to connect people who are homeless in our community with the appropriate support and resources,” stated Pardeep Purewal, the city’s communication manager, in an email.

But one group says the city shouldn’t be evicting campers from the woods.

A spokesperson for the Red Braid Alliance told the Tri-City News that people have a right to safe housing under the Charter of Rights and the city should get a court order if it wants to evict the couple.

“I would say the bylaw might have backed off today but the fact they are evicting people without a legal procedure is a red flag. To me that means that bylaw never had that right in the first place,” said Listen Chen.

However, the city’s mayor says bylaw officers are very compassionate and try to work with people rather than taking a harsh approach.

“These bylaw officers are extremely compassionate and work with people and in fact have been successful in getting a number of people housing,” said Brad West.

He also expressed concern at the lack of affordable rental housing for people in the community, noting that the city is working with senior governments to try and get more non-market rental housing in the city.

“We join in others’ frustration,” said West. “We are in this situation where we have people who need help, who need a place to go, as in this instance.”

COUPLE LOCKED OUT OF AFFORDABLE HOUSING

Sid and Sharon told the Tri-City News that they are looking for an affordable place to rent but they’ve been turned away in favour of larger families or looked down upon because they are currently homeless and are on disability.

They also have a dog, which makes finding a place more difficult.

Sharon said the couple lost a room in a house last spring when the person they were sharing with didn’t pay the rent, resulting in an eviction. Building a cabin in the woods — complete with a wood stove — was a way to stay warm and dry over the fall and winter months, she said.

Now though, they could be out on the street again.

“Hope for Freedom has been looking for us,” Sharon said, “there’s just nothing out there that’s affordable between us and that’s realistic.”