Port Moody nurse goes the extra 160 miles for his hospital

Spenny Lee has spent a large part of the past year working in the COVID ward at Eagle Ridge Hospital. Now he wants to give back, by running 24 hours straight to raise money for the Eagle Ridge Hospital Foundation.
Jul 9, 2021 2:12 PM By: Mario Bartel 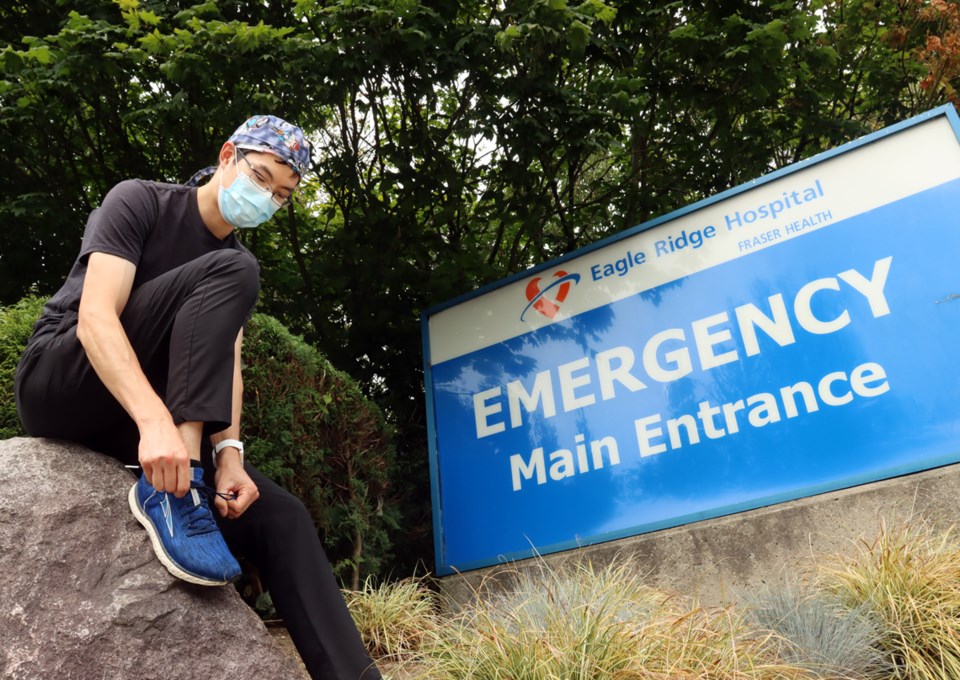 After a tough day at work, Spenny Lee goes running.

A registered nurse stationed in the COVID ward at Eagle Ridge Hospital, he says the past 16 months have been especially challenging: long days and nights, punctuated with anxiety and uncertainty as frontline medical workers toiled to get a handle on the virulent new contagion.

Needless to say, Lee’s been running a lot.

In 2020, he trained for the Sinister 7 Ultra, a 100-mile race in Alberta’s rugged Rocky Mountains. But the July event was cancelled by the pandemic.

This year, he set his sights on the Fat Dog 120-km race in Manning Park in August. Public health restrictions kiboshed it as well.

So Lee’s shifted his focus closer to home, and his heart.

On July 25 at 6 a.m., Lee will embark on his first lap of about 640 around the 400m outdoor track at Heritage Woods secondary school. The 24-hour effort is in support of the Eagle Ridge Hospital Foundation that raises money for equipment and programs at the hospital where he works.

Lee figures he’ll cover about 160 miles, all in the same pair of Altra running shoes

He won’t be wearing headphones to listen to music. He said he prefers to run with his thoughts, and the company of friends and fellow runners who are invited to join him for a few or 100 laps.

“It’s a community. We help each other,” Lee said of the tight-knit breed of ultra-marathoners.

Like most athletes, the running bug bit Lee when he completed his first five-kilometre event. Over the course of the seven or eight years since, his distances have extended ever further.

He said being on the trail, out in the woods, allows him to decompress from his fast-paced job, bringing order to the chaos that often swirls around; the exercise also keeps him in shape for long shifts on his feet.

“Even if I was physically tired,” Lee said, “it’s time away from work to keep my mind off things.”

His fundraiser for ERHF won’t be the first fusion of his passion for long-distance running and his career.

Last year Lee lapped the track at Heritage Woods for 12 hours and raised $2,000.

Lee, who doesn’t follow a formal training program, said the challenge of completing a 24-hour run pales in comparison to the struggles he sees every day in the hospital.

“I know the expense of medical equipment. I know how it can help,” Lee said. “Even if I’m able to help get one piece of equipment, that’s my goal.”