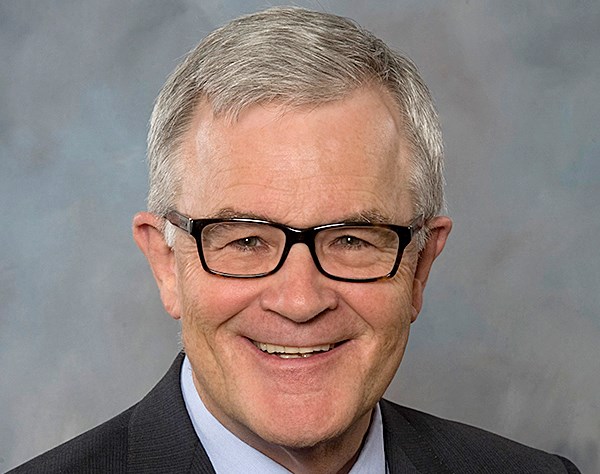 The retiring councillor said he will miss being at the decision-making table but believes the city is in good hands with the six re-elected incumbents and council newcomers Steve Kim and Trish Mandewo.

“I would have some regret if I thought the city were headed in the wrong direction or if I was unhappy with the composition of the new council,” he told The Tri-City News Wednesday. “But I am over the moon with the new council.”

The 67-year-old O’Neill said he decided not to run for re-election this year because he did not like the idea of working for another four years, noting he had a long career in journalism before taking on his role with the city. (Among other jobs, he was a freelance Face to Face columnist for The Tri-City News for a number of years.)

O’Neill’s tenure may have been short compared to fellow retiring council member Mae Reid, who was with the city for 28 years, but he was present for some significant decisions. The Evergreen Extension was completed during his tenure and O’Neill voted on many of the developments associated with the rapid transit line during a period of unprecedented growth for the city. He said he is also happy with the balanced approach Coquitlam has taken on affordable housing.

O’Neill pointed out that in Coquitlam, every incumbent was re-elected last Saturday and Mayor Richard Stewart retained his office by a huge margin, something that was not seen in places like Burnaby, where protests have occurred over the housing issue.

But his proudest accomplishment was helping to limit the rise of property tax increases for residents, he said.

“My key campaign promise was that I would work to reduce the rate of increases every year,” he said. “And every year we have succeeded in doing that. I played a part in that.”

Without the reading and workload that comes with a council position, O’Neill said he will have more time to spend working with the Talitha Koum Society, a non-profit that provides housing to women with addictions. He also volunteers with Blooms into Rooms, a group that organizes volunteers to bring flowers and cards to elderly and sick people in the community.

But he did not rule out returning to the city in a volunteer capacity, possibly taking on a role at an advisory committee in a year or two.

For the moment, he is focusing on Monday’s meeting, which he said will be an emotional moment “like graduating from school or something like that.”

“There is some strong feelings associated with it,” he said. “It has been a tremendous time on council… It was a very rich experience and I am very thankful for the opportunity that Coquitlam gave me.”