Port Moody’s new mayor says his election Saturday was part of a region-wide expression of frustration by voters about the diminishing livability of Metro Vancouver. At 26 years old, Rob Vagramov knows that frustration all too well.
Oct 23, 2018 1:52 PM By: Mario Bartel 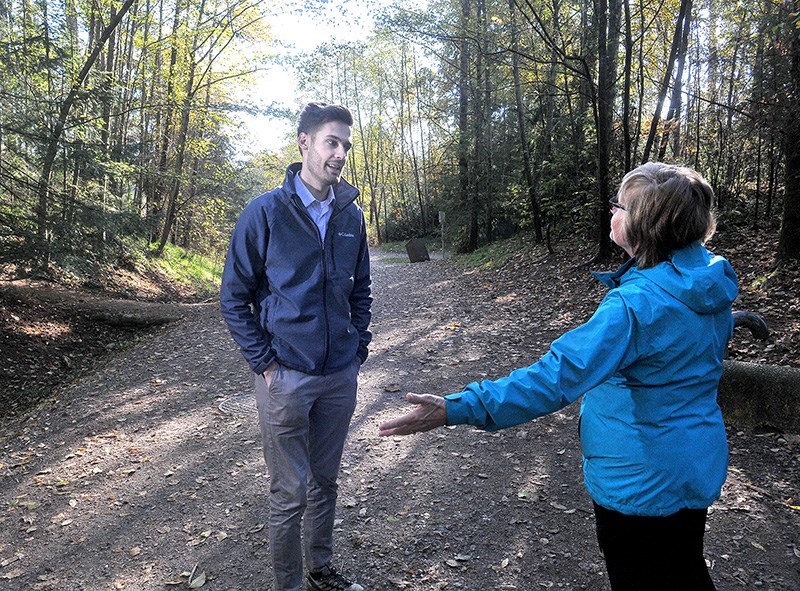 Port Moody's new mayor-elect, 26 year-old Rob Vagramov, stops to chat with a supporter while strolling through Bert Flinn Park on Monday. Vagramov said preventing the park from being bisected by an extension to David Avenue to connect the Ioco Lands is one of his priorities to ease the pace of development and growth that are threatening the quality of life in the city.MARIO BARTEL/THE TRI-CITY NEWS

Port Moody’s new mayor says his election Saturday was part of a region-wide expression of frustration by voters about the diminishing livability of Metro Vancouver.

At 26 years old, Rob Vagramov knows that frustration all too well. He rents an apartment in Moody Centre that he admits probably costs him more than it should in terms of space and amenities. And, going into the election campaign, he said it was unlikely he would ever be able to afford to buy his own place in the city.

Whether that likelihood changes now that Vagramov is mayor will be the test of his next four years.

Vagramov upset two-term incumbent Mike Clay Saturday. He captured 52.27% of the mayoral votes cast in the city to Clay’s 47.73%. The voter turnout of 38% was the highest amongst the Tri-Cities.

While Vagramov concedes it wasn’t a resounding endorsement of his planned direction for the city, he said, “Overall, the result is a pretty healthy spread.”

It’s also representative of the divisiveness that drove the campaign as Clay advocated for the continuation of the city’s growth to meet a regional population target of 50,000 residents by 2041 while Vagramov said the pace of development of projects already approved, in the pipeline or even just a glimmer on the horizon meant Port Moody’s population was headed beyond that goal.

Saturday’s vote — which also saw the balance of power on council shift towards support for more moderate growth with the reelection of ally Hunter Madsen and the addition of Vagramov supporters Amy Lubik and Steve Milani — puts the brakes to wholesale changes to the city’s official community plan to accommodate increasing densification, the mayor-elect said.

That means there’s still room for development but, Vagramov said, there will be more attention paid to protecting the city’s natural beauty and increasing its park space.

“People take parks and nature pretty seriously in Port Moody,” Vagramov said. “I don’t think that issue was given sufficient attention over the last four years.”

He said one of his first priorities will be to instruct city staff to come up with updates to the city’s OCP — which are scheduled for 2019 — that reflect more moderate growth and heed livability. And those revisions will be subject to vigorous public scrutiny.

“We have a real good opportunity to take in a whole bunch of input we got in this election and setting that input into direction for the new OCP revision,” Vagramov said. “When we have folks coming to council, I don’t want to see folks turned away.”

Vagramov, who ascended to the mayor’s office after serving one term on council, said he was “disgusted” at some of the turns the campaign took.

Vagramov said he doesn’t know if those fissures can be healed but the shift in direction he is planning for the city isn’t an absolute reversal.

“We have to turn this ship slightly,” he said. “Shifting a couple of degrees now will have a resounding impact 40 years from now.”

Vagramov said that shift will also allow Port Moody to catch up with some of its infrastructure needs like more affordable housing, seniors' housing, a new, larger library, more sports facilities and updates to aging community centres by extracting fees from developers rather than selling off city assets like the fire hall property.

Vagramov will be the youngest mayor in Metro Vancouver, and one of the youngest in Canada. He said it’s a label he has gotten used to  since he was first elected to council when he was only 22

He added he’ll be looking to people he has met through his work with the Lower Mainland Local Government Association for counsel and guidance.