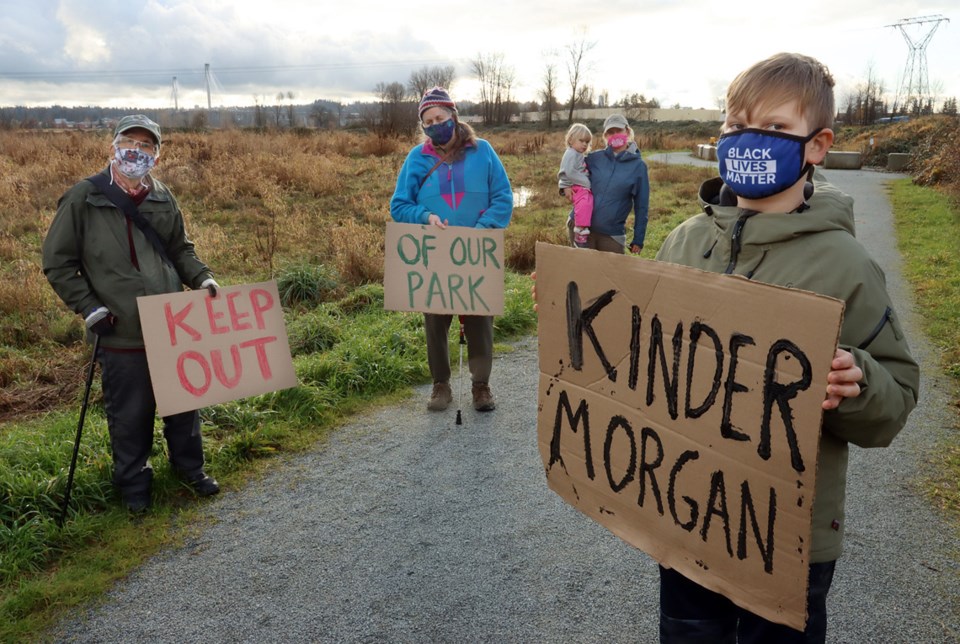 MARIO BARTEL/THE TRI-CITY NEWS Kiyoshi Takahashi, a regional parks volunteer and longtime naturalist and birder, Elaine Golds, past president of the Burke Mountain Naturalists, and Jane Thomsing, of the Colony Farm Park Association, with her children, Aaron, 10, and Anjalee, 3, are raising concerns about the Trans Mountain Pipeline Expansion Project using 11 acres of Colony Farm Regional Park as a temporary construction site for staging pipe that will be placed under the Fraser River.

Colony Farm Regional Park in Coquitlam will become a staging area for the federally-owned Trans Mountain Pipeline Expansion (TMX) project, which aims to use 11 acres of the park as workspace and pullback area while it installs pipe under the Fraser River.

Metro Vancouver, which operates Colony Farm Regional Park, agreed to the temporary use after a series of negotiations, and a $1.4 million community benefit promised in exchange.

But while Metro Vancouver officials say the money will be used to enhance the park, groups including the Burke Mountain Naturalists and the Colony Farm Park Association fear the TMX operation slated to start in 2021 will harm sensitive grasslands and wildlife, including birds and rare species of snails, in addition to reducing public access to the popular park.

“They will be turning this park area into a construction site and the environmental impacts will be devastating,” said Jane Thomsing, of the Colony Farm Park Association.

Local naturalists who have been building bird boxes and keeping track of wildlife — including nesting heron families that disappeared during the Port Mann Bridge construction — visited the site Dec. 8, and called for greater public participation in the decision.

“They didn’t ask for public input and they certainly didn’t talk to the naturalists in the area,” said Elaine Golds, of the Burke Mountain Naturalists.

This is not the first time the groups have raised the alarm about TMX construction. In 2014, the pipeline, then owned by Kinder Morgan, sought approval to use a portion of the park as a staging area but changed its mind and considered using railway siding instead.

Six years later, Trans Mountain said it was shifting its staging area to an 11-acre swath of the park due to “engineering design changes focused on safety and seismic considerations,” according to a Dec. 4, 2020, TMX press release.

“Safety is our number one concern,” said Trans Mountain’s manager for Lower Mainland and community investment Lexa Hobenshield in the press release.

“We explored a number of options for our original lay down location on the rail siding, however, due to our commitment to thicker walled pipe at water crossings, we now need to use an existing multi-purpose pathway within Colony Farm.”

Once the pipe is laid under the Fraser River, TMX will “return the land to its original or better condition,” Hobenshield added.

Despite Trans Mountain’s assurances, local groups say the land has been disturbed enough with noise from the Port Mann Bridge construction in 2012 and a recent water main installation on the western edge of the park where there is now a gravel walking trail.

“It’s time to give the land a rest,” said Thomsing, “It needs time to restore.”

According to a map on the Trans Mountain website, much of the area necessary will be at the south end near the Forensic Psychiatric Institute, but an access road is required along the western edge of the park to Lougheed Highway.

A portion of the pipeline will go under the Mary Hill Bypass, then swing west toward and under the CP Rail tracks, running through Coquitlam to Burnaby, including under United Boulevard.

In 2019, the city of Coquitlam sought additional funds in compensation for the project.

Meanwhile, Coquitlam residents continue to be concerned about the project through Colony Farm.

Among the species that utilize the fertile grasslands, formerly an agricultural area for dairy and vegetable production, are great blue herons, barn owls, short-eared owls and barn swallows. The groups also note the area is especially important for migratory birds, which nest in the grasses and for voles and small animals that are food for eagles and other raptors.

Metro Vancouver officials say they didn’t have much choice in working with TMX because they would have been forced by the Canada Energy Regulator to allow the work. At least by negotiating, the regional authority was able to strike a deal for a larger community benefit.

Neal Carley, Metro Vancouver’s general manager for parks and environment, said he was given a short timeline to reach a deal with the pipeline company and worked to reach an agreement under threat that TMX would seek a ruling from the Canada Energy Regulator.

“It was going to happen any way through the Canada Energy Regulator or we could negotiate something — that’s what we ended up doing,” said Carley.

The hope is that the $1.4 million will be used for projects in the park, such as invasive species removal, and Carley promised that user groups would have a say in the work to be done.

The agreement is for two years; however, TMX’s use of of the park could be shorter.

The $12.6 billion pipeline project now owned by the Canadian government is making its way across the province, with one of the next stages an underwater pipeline from Surrey to Coquitlam and through to the Westridge Marine Terminal in Burnaby.

As construction of the pipeline ramps up across the Lower Mainland, so too have dissenting voices. On the Burnaby side of the Brunette River, a camp and treehouse were installed by protestors to block tree-clearing work — the former of which was recently cleared out by police. And on Dec. 10, two seniors were slapped with $150 fines for trespassing on CN Railway property after they locked themselves to a tree in the path of pipeline.

But others are more hopeful that the pipeline’s construction will benefit the local community.

Anmore Mayor John McEwen, who chairs the Metro Vancouver parks committee, said he, too, hoped the cash could be put to good use within the park. “We’re putting together a real extensive plan in terms of mediation. The park will be much more developed, this investment will really benefit.”

He stressed that the infringement on the park would be minimal, with most of the area used not frequented by park users but “scrub brush” although detours may be required for some trails.

— With files from Dustin Godfrey