The Coquitlam Express is looking for a new head coach after rookie bench boss Dan Cioffi stepped down from the position on Saturday.
Mar 7, 2021 9:00 AM By: Mario Bartel 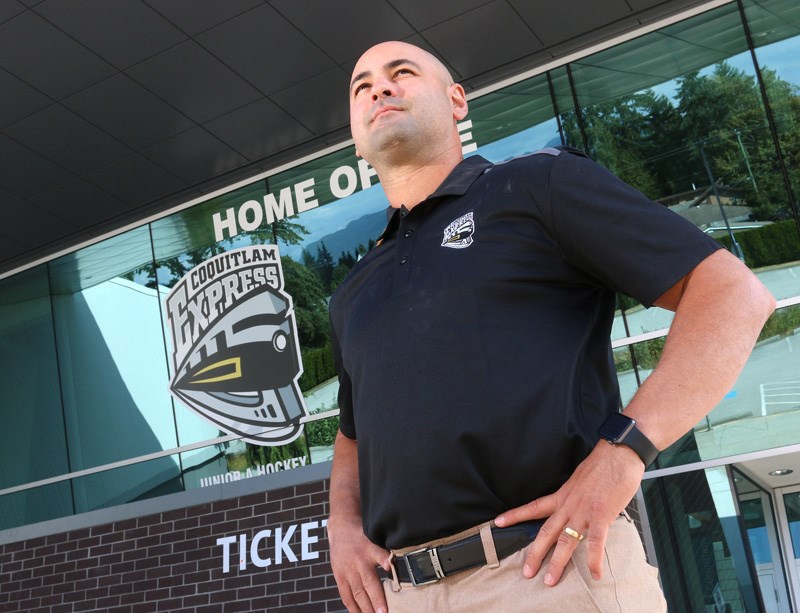 Dan Cioffi has stepped down as head coach of the Coquitlam Express after less than a season.MARIO BARTEL/THE TRI-CITY NEWS FILE PHOTO

The new interim head coach of the Coquitlam Express has a name familiar to Lower Mainland hockey fans.

Adam Nugent-Hopkins was named to helm the BC Hockey League team on Sunday while it searches for a replacement to Dan Cioffi, who resigned his post on Saturday.

Nugent-Hopkins is the older brother — by five years — of NHLer Ryan Nugent-Hopkins, a former first overall draft pick in 2011 by the Edmonton Oilers who played his minor hockey at Burnaby Winter Club before graduating to the Red Deer Rebels of the Western Hockey League.

Adam Nugent-Hopkins coached the U18AAA Greater Vancouver Canadians prior to joining the Express. He played two seasons with the Grandview Steelers and Port Moody Black Panthers, of the Pacific International Junior Hockey League, then took several years away from the game to become a strength and conditioning coach. In 2013/’14, he played a season with the Concordia University Stingers in Montreal, Que.

Express general manager Tali Campbell said Nugent-Hopkins’ background in conditioning athletes at all levels make him an excellent fit to work with the team’s players while they await word from provincial health officials whether they can play any kind of season after several months of practices because of public health restrictions.

“He has a passion for working with athletes and is committed to teaching them good habits on and off the ice,” Campbell said in a press release.

Dan Cioffi stepped down as coach and assistant general manager “to focus on his family and pursuing a new opportunity.”

He led the team to eight wins and three losses in a truncated exhibition schedule last fall before it was shut down by public health orders on Nov. 7. He said the uncertainty of the season was difficult.

“It has been a roller coaster season that has taken an emotional toll on all players, staff and families associated with our team,” Cioffi said in a statement.

Cioffi took the reins of the Express last summer after the team couldn’t come to a contract agreement with former head coach Jason Fortier who led the team to a regular season championship and a four-game sweep of the Langley Rivermen in the first round of the playoffs before the BCHL was shut down by the COVID-19 pandemic.

The Express was Cioffi’s first opportunity to lead a BCHL team on his own, after previous stints as an assistant coach for the Burnaby Express and as an associate coach with the Salmon Arm Siverbacks.

The BCHL is currently on hold as it awaits approval from provincial health authorities on a plan to return to play with teams grouped into five regional pods competing in a 20-game season. Last week, commissioner Chris Hebb indicated the league would be forced to cancel the season if approval wasn’t granted by Thursday. But when that didn’t happened, the deadline was extended to allow negotiations to continue.