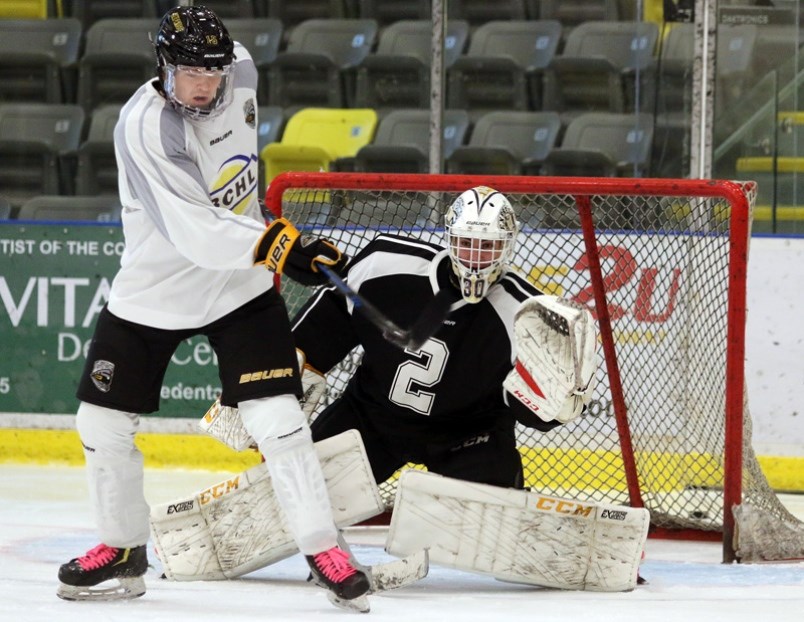 TRI-CITY NEWS FILE Several Coquitlam Express players, including both regular goalies, have been sidelined because of a public health order banning adult sports. The idled players are 19 and 20 years-old and are considered adults.

The Coquitlam Express is a team divided, but not by dissension or cliques.

Several players are being prevented from practising with the BC Hockey League team because of a public health order issued last week by provincial health officer Dr. Bonnie Henry that bans adult sports.

A clarification to the order means 12 players aged 19 or 20 on the Express roster can’t participate in practices because they’re considered adults.

Express general manager Tali Campbell said the team was caught off-guard by the order, that’s impacting the activities of other BCHL teams across the province, as well as those in the Pacific Junior and Western hockey leagues.

Campbell said the order is just the latest blow to a season that’s yet to begin because of the COVID-19 pandemic.

“This has been a tough year for all hockey players,” he said.

In anticipation of a Dec. 1 start, teams were able to begin training camp last September and play exhibition games against nearby cohort teams in their geographical area. But the Express and other Lower Mainland teams like the Surrey Eagles, Chilliwack Chiefs and Langley Rivermen were forced to suspend their exhibition schedules Nov. 7 because of public health orders in the Fraser and Vancouver Coastal health regions. Those orders were then extended to the rest of the province two weeks later, shutting down the entire league as of Nov. 19.

Since then teams have still been able to conduct practices and workouts.

Campbell said while the Express’s younger players are continuing to hit the ice at the Poirier Sport and Recreation Complex under ViaSport’s Stage Two protocols that permit development of individual skills without body contact, older players have been confined to off-ice activities like working out in the gym and attending mental health sessions. He added the team had to bring in extra goalies as regulars Jack Watson is 20 years-old and Joe Howe is 19.

Campbell said while the league lobbies for an exemption to the order, the Express is allowing its older players who want to go home for the Christmas holiday that opportunity.