Jodi Proznick, an award-winning bassist, educator, composer and producer from Port Coquitlam, plays on June 30 with Trilogy and July 4 with the Vancouver Chinese Music Ensemble.
Jun 10, 2021 3:57 PM By: Janis Cleugh 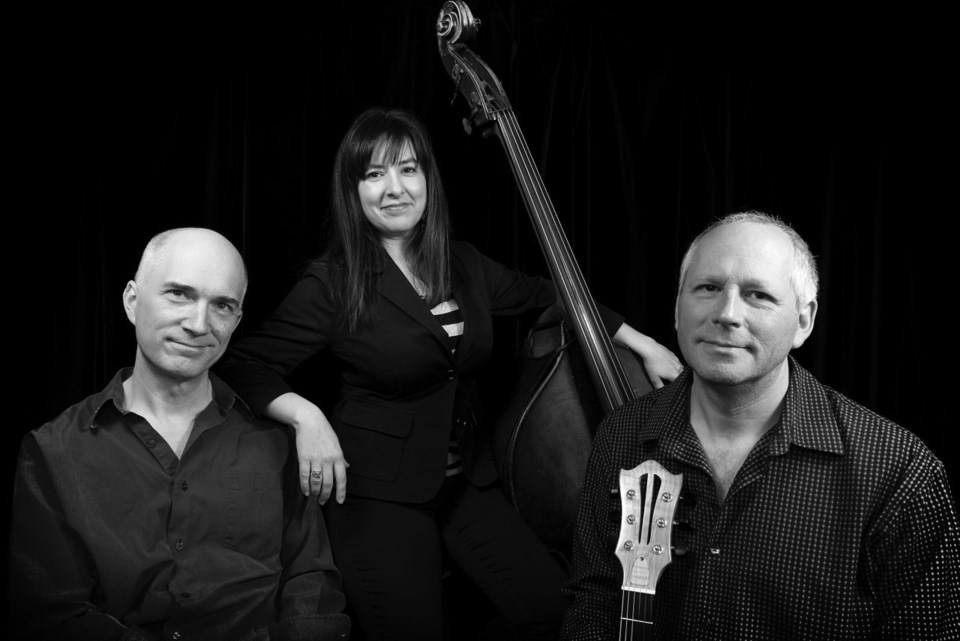 Trilogy is made up of Bill Coon on guitar, Miles Black on piano and Jodi Proznick on bass. The trio performs June 30 at Pyatt Hall in Vancouver for a live-streamed concert.jesse cahill

If there are two words to describe how people reacted to the pandemic lockdown last year, they’re the verbs “pivot” and “prioritize.”

Luckily for Jodi Proznick — a Juno award-nominated bassist, educator, composer and producer — the Port Coquitlam resident did both.

First, she learned how to online teach her students at the Vancouver Symphony Orchestra School of Music and Kwantlen Polytechnic University.

Started last September, the collective features talks with other leading musicians via YouTube as well as digital workshops and courses.

“It’s been quite the year-and-a-half,” she told the Tri-City News. “I’m tired but proud of all of what’s been done. It’s been amazing.”

This and next month, Proznick will provide more online music content when she takes part in two live-streamed performances for the TD Vancouver International Jazz Festival, which runs from June 25 to July 4.

On June 30, she’ll be playing at Pyatt Hall in Vancouver with Trilogy, a trio that also includes guitarist Bill Coon and Miles Black on piano.

Formed a dozen years ago for an Oscar Peterson retrospective, Trilogy is a drum-less ensemble made up of “accompanists at heart.”

“There is a lot of deep listening and generosity of spirit,” she said. “We arrange on the spot and call it ‘close your eyes music.’”

Proznick worked with the instrumentalists a couple of years back for a jazz/traditional Chinese music concert at Dr. Sun Yat-Sen Classical Chinese Garden. “It was really fun and interesting,” she said. “We wanted more.”

Next month, the musicians record their work to show “how the arts can move us along with cultures and bring things together.”

Still, Proznick said when the world reopens again and there’s a push for large gatherings, she won’t be hitting the road like she used to.

Her new priorities are to focus on her students and the Music Arts Collective — “a game changer to reach musicians in rural areas,” she said — as well as tour with collaborators and take time for herself and her family.

The pandemic, in fact, gave her time to think about “all the things I’ve always wanted to do, which is to work on social justice and advocate for more women in music.

“I’ve had a lot of time in front of the computer. I don’t sit and dwell on what we can’t do: I want to make things happen…. The pandemic was an opportunity for me to reset many things in my personal and professional life.”

• To see the line-up for the TD Vancouver International Jazz Festival, which runs from June 25 to July 4, and to purchase tickets to live-streamed shows, visit https://www.coastaljazz.ca/.

Get your stuffies out for Festival Coquitlam's Teddy Bear concerts and parade
Jun 7, 2021 11:56 AM