'It seemed so far away. Until it wasn't': How the Tri-Cities grappled with the coronavirus

As the pandemic and its fallout took root across Coquitlam, Port Coquitlam and Port Moody, economic hardship, suffering and grief over those who had died were balanced by extraordinary acts of compassion
Dec 31, 2020 1:26 PM By: Stefan Labbé 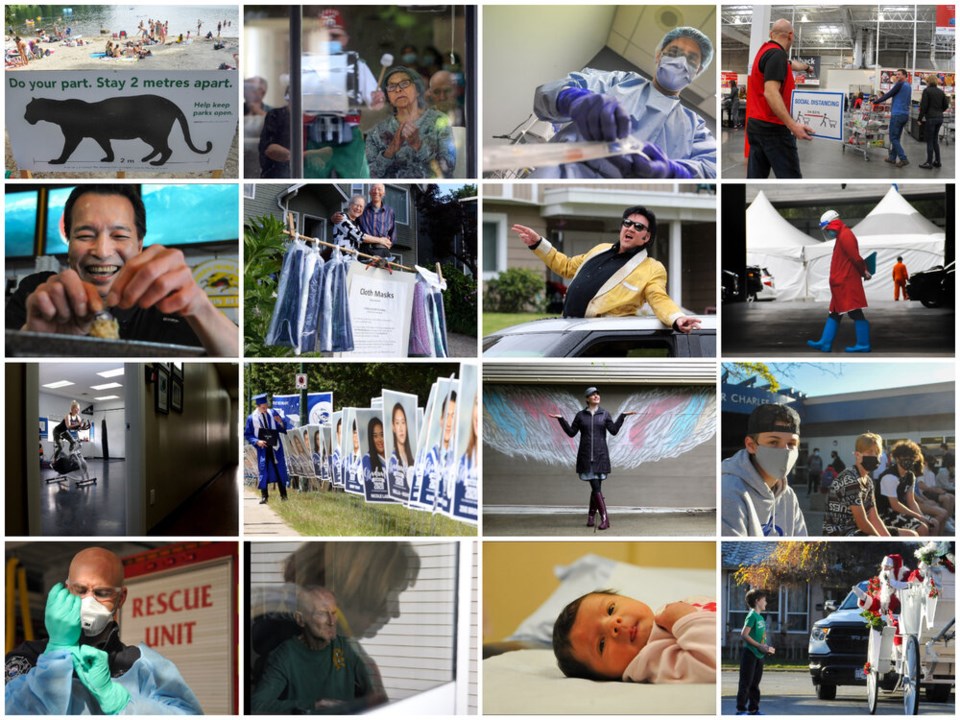 The first hints the virus was getting close came from travellers in isolation — held hostage on a cruise ship, stuck in Central America, or for some who made it back, behind a bedroom door in Coquitlam waiting out the infection.

Still, for many residents of the Tri-Cities, the novel coronavirus was not much more than the lead part in a drama playing out in some industrial city in China.

It seemed so far away. Until it wasn't.

In early March, Canada’s Public Health Agency urged people returning from Iran to self-isolate as the country became a major hub for the spread of the virus. Seeing what was coming, the Tri-Cities Persian community was among the first to cancel public events to stem the transmission of the virus, calling off its New Year celebrations.

By the third week of March, everything began to shut down. Port Coquitlam, Coquitlam and Port Moody each made the call: all civic facilities, even playgrounds, would be shut down until further notice. Mark the rise of the Zoom council meeting.

At the same time, School District 43 was directed to keep its doors closed after spring break, part of a provincial shuttering of public education with no end in sight.

“How will students be taught?” read the front page of this newspaper in its March 19 edition.

In our newsroom, reporting that started with single-digit case numbers as the virus first arrived in the province was replaced by the daunting task of documenting the unravelling of public life.

Mornings passed in makeshift home offices chasing down officials, afternoons donning surgical gloves and masks to interview and photograph how people were coping with an existence turned upside down.

Overriding every decision was the uncertainty and fear of what catching this new virus would mean.

“Be careful. Stay back,” warned our editor when we’d go out to visit long lines at the grocery store or interview heart-sick family members shut off from loved ones in care homes.

The streets and parking lots around Coquitlam Centre were nearly empty of cars. But inside grocery stores and warehouses, and on construction sites, the “essential worker” was born.

One Coquitlam entrepreneur was among the first in Canada to re-tool his factory into a PPE powerhouse; another donated his 3D printing farm to fabricate visors for health-care workers. To "pivot" became less a Silicon Valley buzz word and more a small-business mantra for survival.

Empathy and a helping hand came from every industrial park and cul-de-sac. On Heritage Mountain, isolated Tri-City students took to their streets to colour the neighbourhood in messages of hope, while one elderly seamstress began a mask sewing journey that saw her hand out thousands of free — and stylish — face coverings in a sewing crusade that continues to this day.

A group of Port Coquitlam quilters took over an empty parking lot in front of Cineplex Cinemas to "feel more normal." An Elvis impersonator found his voice again, his drive-by performances finding an eager audience. And in a neighbourhood near the shores of the Coquitlam River, lonely neighbours found a new sense of community dining together on their front lawns — all to the sound of the seven o'clock cheer to front-line workers.

But amid the hope, the destructive toll of the newly dubbed COVID-19 illness had started to rear its head by early April, first with an outbreak at a seniors home in Port Coquitlam and then in Coquitlam.

Inside Dufferin Care Centre, family and anonymous sources recounted scenes of fear as the first residents started to die of the pathogen. As of Dec. 19, seven assisted and long-term care homes across the Tri-Cities have been hit with outbreaks leading to the deaths of dozens of residents. Families, reeling in grief and anxiety, created new rituals to cope with separation.

Beyond seniors homes, the virus has shuttered everything from restaurants, supermarkets and factories to a yoga studio, construction sites and even Ikea.

In one of the region’s largest outbreaks, the coronavirus gained a foothold at a poultry plant in Coquitlam, quickly spreading to over 60 low-income workers and driving home fears that the pandemic is anything but a great equalizer — that those living in crowded homes, undocumented and with little access to resources are suffering the most.

By summer, most were ready to exchange bread flour and bathrobes for hiking boots and the promise of the freedom of the outdoors.

But not long after B.C.’s phased reopening began, the virus found its second wind, first exploding in a series of outbreaks in Kelowna and then returning to the Lower Mainland, including the Tri-Cities.

Public figures and much of the public itself blamed younger generations — at times, unfairly — for crowding into places like White Pine Beach in Belcarra and Buntzen Lake in Port Moody.

At the same time, inside clinics, Tri-City physicians, nurses and cleaning staff worked feverishly to act as both a stop-gap for coronavirus testing and as clearinghouses for family medicine to keep pressure off emergency rooms. Impromptu clinics sprung up to serve everyone from end-of-life cancer patients to babies born into a pandemic.

When Fraser Health delayed the opening of a Tri-Cities high-volume COVID-19 test collection centre, it was these doctors that put themselves on the line to serve the community, only halting when burned out and forced to act as whistleblowers.

The reprieve of summer and its Phase 3 reopening was a boon for commerce, and it was clear another near lockdown would decimate what businesses, especially in the service industry, had survived.

But the state of jobs and industry weren’t the only source of angst.

September drew near and a bewildering mixture of anxiety and reprieve accompanied the reopening of schools as many students returned for the first time in six months.

Then caseloads started climbing again. One school after another reported an exposure event, though, to date, none have escalated to a cluster or outbreak in School District 43.

The same can not be said for other workplaces. Carpooling, the lunchroom and group indoor fitness activities quickly became dominate sources of transmission during B.C.’s second wave.

But no matter how strict a business’s safety measures, social gatherings quickly overtook all other settings as the most virulent and dangerous. And age, it appeared, did not guarantee safety, a point brought home by the death of Port Coquitlam worker who passed away in his sleep last month before his 40th birthday, devastating those who knew him.

The coronavirus’s second wave in B.C. has been a story of exponential growth. Whereas in the spring, most of the cases were contained to isolated, though crippling, outbreaks, by the fall, case numbers shot up across the province in every demographic.

In the Tri-Cities, new cases in October tripled those of September, an amplification of cases that lifted the overall tally well over 2,000 by the end of December. Long-term care homes have once again become an epicentre of death due to the virus.

Yet there are some positive signs. New public health orders introduced across the Lower Mainland in November, and later expanded and deepened province-wide, appear to be levelling off the rapid spread of the virus.

A global network of laboratory technicians and scientists, as well as logistics and procurement experts, have all contributed to the rise of a slate of vaccine candidates — some already approved — engendered and manufactured at a speed never seen before.

We now stand with the rest of the world on the brink of the largest mass-vaccination program in the history of humanity.

But first, lonely holidays, and a happy New Year.